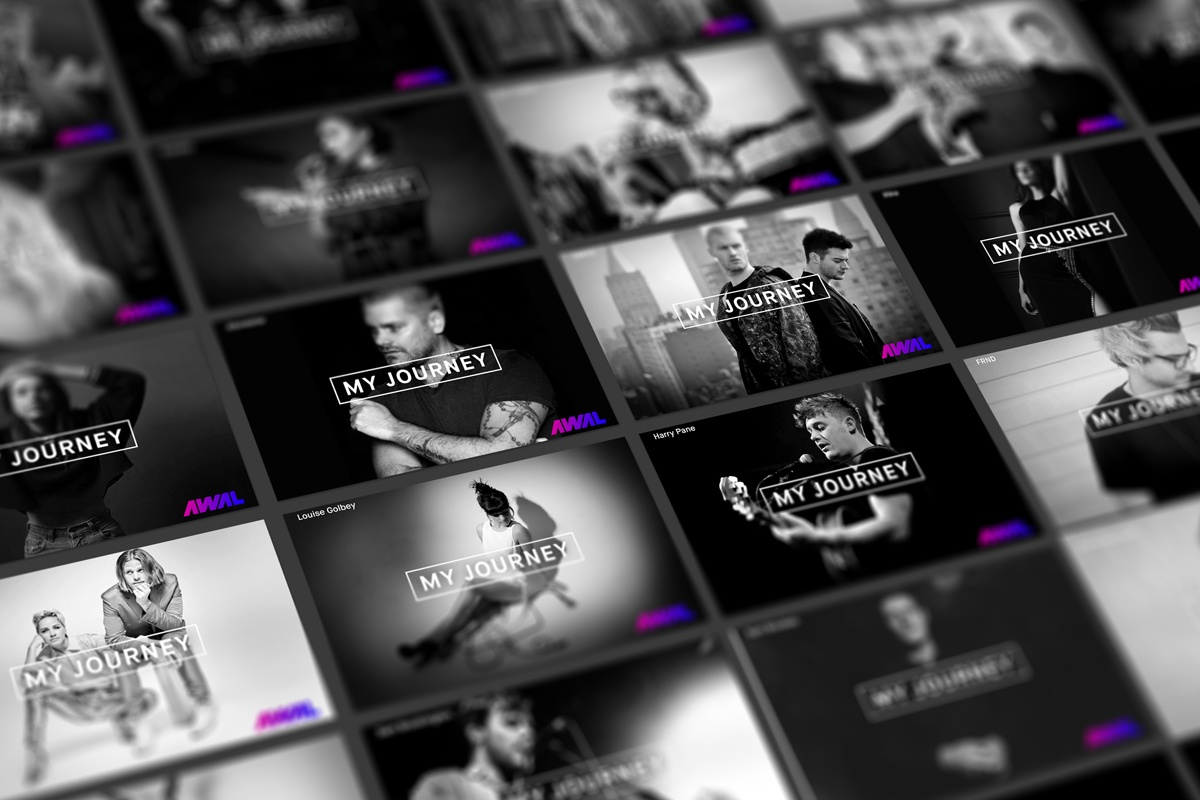 In September, we started our “My Journey” series as a way to share real AWAL artists’ stories and shine a light on their accomplishments, challenges, and perspectives on making music and taking control of their own careers.

Of the 20-plus artists we got to know, no two have even close to the same story or path, proving that there’s no one right way to succeed in music. Let their unique and stories and aspirations inspire you as you look forward to chasing your goals in 2018.

Q: What have been some of the most rewarding moments in your journey thus far?

I’d have to say, the every-day small gestures like when fans will email me, or message me to tell me how much they appreciate the music.

[Playing in] Japan, was a huge experience, too! It helped me start to internalize a feeling of slowly becoming more at ease with my musicality and feeling that I can sustain myself musically, in terms of writing, mixing and production.

Plus, I really love the community that I have with my friends who are also musicians here in London, such as: Carmody, Alfa Mist, Laura and Tom Misch.

Lastly, I am co-founder of an all-female podcast with Ruby Wood, Emmavie, Laura Misch, and Carmody!

Q: How would you describe the point in your career that you’re currently at?

At this point, we’ve recorded two albums. Our second album, Allies, was one of the first crowdfunded releases (£100K raised from fans in six weeks). We are currently writing a third album, have headlined a show at Scala, supported The Vamps at Wembley Arena. We’re even writing music for a film, ‘Kat And The Band‘ featuring Dougie Poynter from McFly.

Read more from Some Velvet Morning.

Q: What have been some of the most rewarding moments in your journey thus far?

Definitely seeing a song we wrote on the Tom Cruise movie trailer. That was just crazy! Also, it was extremely empowering to see a small bunch of fans singing our songs at festivals this year! Make us really feel like we’re building a community and loyal following.

AWAL Insights™: On an average, Rika had about 42,000 monthly listeners since joining AWAL in September!

Q: How did your journey first begin as an artist?

My journey began as a chorister in the Queen’s private chapel in Windsor Great Park. From the age of five to 10, I sung for the Queen and the Royal Family every week.

I started writing songs from as early as nine; they were then as they are now — a search for discovering more about myself and the world around me. I cut my teeth playing covers in pubs for years growing up before I was brave enough to start squeezing in my own songs in between “Jolene” and “God Only Knows.”

Q: What are your ultimate career goals as artists?

We would love to be able to make a career out of [music]. I can confidently say that we all feel more at home out on the road than back at home, and to be able to be in that world of 24/7 writing, touring, and recording would be a dream.

Q: How would you describe where you currently are in your career?

I’ve now been a full-time musician for over five years. To date, I have sold over 25,000 albums completely independently without a record deal and performed in eight different countries. I’ve reached over 940,000 total views on my YouTube channel and 50,000 combined followers on social media.

I am currently working on writing new songs, building my fanbase online and offline and increasing my visibility. I strive to introduce new people to my music every day. So far this year, I have also run nine pop-up shops in different shopping centers around the UK where I promote and sell my music and merchandise.

AWAL Insights™: Although 39% of Alonestar’s streams in 2017 came from the US, Japan and his native UK were tied for second with 14% each.

Q: What have been some of the biggest challenges you’ve faced so far?

It’s an ongoing struggle to be a female musician and be taken seriously, but being the first female to study music and composition at the Royal Academy of Music in 20 years was a great step in being able to hold my own in the studio environment, and it’s set me up well. It was hard work, and I’m still studying new stuff all the time.

Also, being in a challenging management situation where they wanted me to lose weight, etc. was hard to maintain my sense of self, but I came through the other side stronger.

Q: Where are you now in your musical journey?

After coming home to study in Bristol, I have since gathered over half a million Spotify streams on my debut, self-released EP, Peace of Mind. Whilst being supporting by BBC Introducing/6 Music, I was also lucky enough to be booked for Glastonbury, Reading & Leeds, Y NOT, and BBC 6 Music Festivals.

Q: How has your experience with AWAL been so far?

Pretty unreal. Ben Godding from AWAL has been a number-one fan of my songs since he heard them, and he gives me wonderful advice and affirmation every time he can come to a gig, not to mention what he’s done behind the scenes. It means the world that he believes in my music, and is championing it across the industry like this.

Thanks to AWAL, my face is today the cover of Indie Mixtape on Spotify  — six months ago less than 10 people had heard my demo. I can’t really believe that. Thanks, Ben. Thanks, AWAL.

Q: What have been some of the most rewarding moments in your career so far?

I have had the pleasure of opening for some big artists at some amazing venues, including George Benson at Kenwood; Roberta Flack and En Vogue at Indigo2; the Stylistics on their UK tour; and Roy Ayers and Omar [Lye-Fook] at the Jazz Cafe. I have also worked with Example, Newham Generals, and Omar on tracks. Very honored to have worked with such artists.

Plus, I have been heavily involved with BBC Introducing (who have just celebrated their 10-year anniversary). Through BBC Introducing, I got to perform at Glastonbury, record at Maida Vale Studios, have songs across the BBC radio network (Radio 1, 6 Music, 1Xtra, BBC London), which has led to other opportunities.

My biggest claim to fame is the fact Ed Sheeran is in one of my music videos. (We used to do a lot of gigs together just before he was signed, and he even mentions me in the “thank-you” section of his first album credits!)

AWAL Insights™: Sea Girls joined AWAL in May, and since then, they’ve had over 457,000 streams.

AWAL Insights™: Anna Pancaldi released two singles on AWAL in 2017, “Brother” and “Sweet Charity,” which have garnered over 800,000 streams combined.

What are your ultimate goals for your music career?

Who we are and what we do is such a conversation with our outside world. It’s a challenging, yet important, reminder. So I want to do exactly what I want to do and I want to be worshiped for it.

What are the next big milestones in your career?

My 2018 tour. I’m really looking forward to performing live, as that is where I get to really get the audience’s feel for what I have written.

Also, I’m excited to continue writing in the studio as much as possible. My latest single, “Bad Influence” came out on November 10th, so I’ve been promoting that and encouraging people to show their bad side with #likeabadinfluence across socials while traveling around London and causing mischief myself.

We have more new music ready for the new year, so for me it’s about getting as much music out there and performing it as much as possible.

AWAL Insights™: Although OMYO is based in the UK, 60% of all streams of their latest single, “Wait for Your Love,” released in November, are coming from Spain!

AWAL Insights™: Stalgia has earned over 5.2 million streams since joining AWAL in November 2016.

I 100% want to tour the world and perform to as many people as possible. Glastonbury MainStage would be pretty insane, too. I just want to be doing it all for a very long time.

One of the most rewarding moments was being able to have people connect to the lyrics of my songs. They all come from a real place and actual events I’ve been through so when someone says they can relate or it helps them get through something, it takes on another meaning.

Thank you to each and every artist who shared their story with us for My Journey in 2017! If you’d like to be featured in 2018, do this.

If you’re looking for a true partner to help you take your career to the next level in 2018, become an AWAL member like these artists!