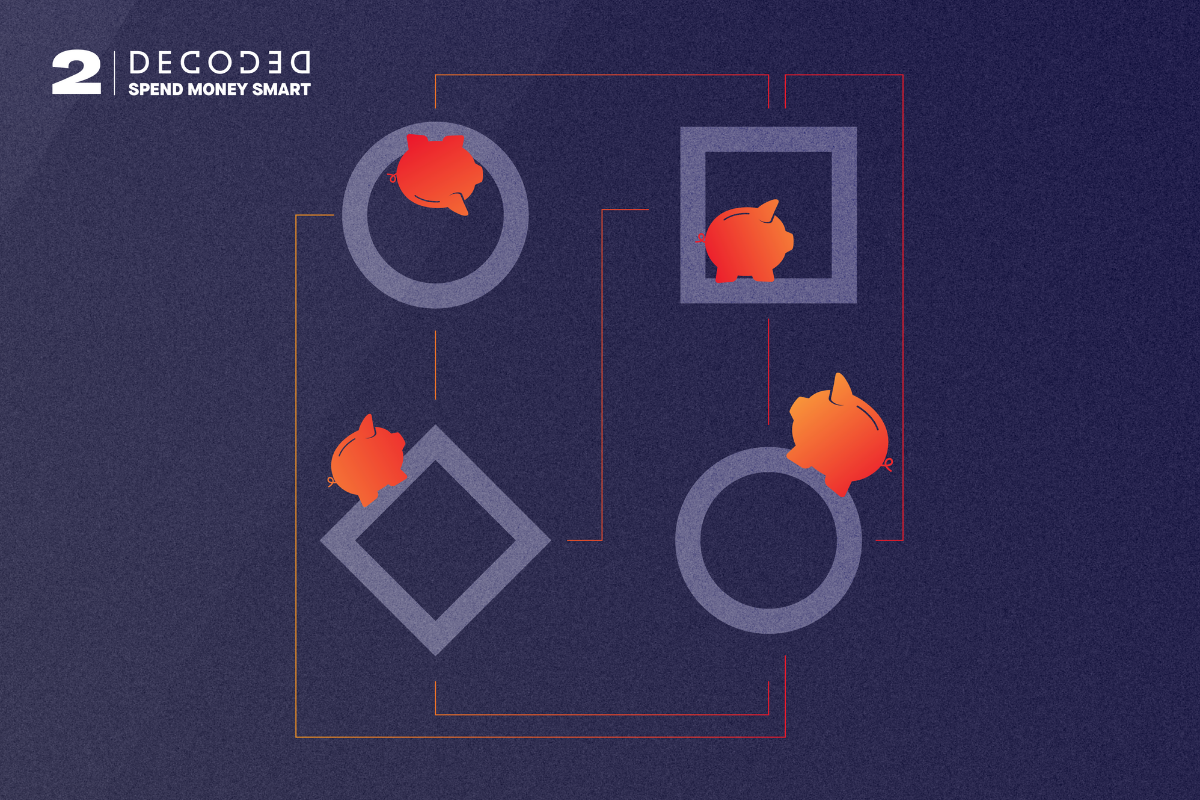 We made a wonderful, colorful infographic to help you put your eggs in the proper baskets.

This is the second (for PT 1) of a five-part Decoded series in which we break down (1) a mental framework to help spend money in the right places and (2) real-world examples from 10+ marketing masterminds.

Money’s funny. It’s easy to spend. It’s much harder to spend smart. If you give $15M to 100 people and tell them to go make more, there’s a good shot at least half will let you down. Big bank accounts don’t ensure success, just as massive advance checks won’t automate secret star-making processes.

It helps to think of ideas, funds, and collaborators as resources. Costs — incurred when we put resources to use — ideally function as categories of self-investment. After digging into different artist case studies and speaking with a dozen creators, managers, and marketers, we’ve come to define self-investment as a series of steps that work like checks and balances.

Young teams and veteran operations all suffer from choice inundation. Amidst dizzying opportunity and endless distraction, it’s tough deciding how to spend what you’ve got. This framework tackles that problem head-on, encouraging a simple approach: Prioritize the stuff you want people to remember you for first. Only then is it time to think about how you can tell everyone about the stuff you make.

Across the board, one question reigns: How can we spend what we have today to benefit ourselves most tomorrow? This can mean wildly different things for different artists, genres, strategies, etc., but the general goal is to make investments that yield returns. If a producer/engineer drops $5000 on a studio, she likely has expectations to make that back and then some in the first year of operation.

But return on investment (ROI) doesn’t have to include dollar signs — at least not from the jump. Attention is a return. Good will is a return. Fan retention is a return. If a home studio leads to more collabs and a healthier network, dividends could come later. A $20,000 video might not generate $20,000 in YouTube royalties, but it could help lock down a Spotify playlist add that kickstarts the road to recoupment. Or that same video might instead impress a bigger artist enough to bring you on a tour that generates $20,000 for your team. The relationship between spending & success isn’t linear. That said, most folks don’t have $20,000 for a video, and it’s easy to misuse those funds even if you do. “We dropped 20 racks on a mini-movie” sounds like a flex, but it’s just as readily an admission of guilt.

To start, hop in the mental helicopter and look at the system most music spending exists within. Like we discussed earlier, every team has resources — whether it’s ingenuity and an ear for 10/10 beats or brand equity and millions to spare. Those resources — when put to use across creation, production, touring, networking, and marketing — impact two crucial forces:

These two forces combine to determine whether folks care about you or can’t stand you. They work with each other to propel creators forward and they work against each other to destroy careers. Either way, the results manifest in returns, or lack thereof — Wikipedia views, streams, ticket sales, degrees of social engagement, etc.

The nature and quality of returns can enable reinvestment, fueling the resources pool with new ideas, increased funding, and healthier networks. Returns also provide feedback that can shape the way teams think about their resources, shifting priorities and costs in response to what’s working and what’s not. With that in mind, we turn our attention to the first part of the equation.

Luck favors the prepared. It’s tempting to brainf*ck this, but that’s all it comes down to. Investments in amplification only yield the most benefit when investments in your core foundation (music, aesthetic, identity) and career building blocks (performing live, having a trusted network for constructive feedback) precede them. Here’s that idea, but with pretty colors.

o Have I put my best possible foot forward with my music, photos, and visuals?

o Have I tested my ideas by bringing them to my base and people with trustworthy opinions?

o Have I activated my core audience and put my work in front of the stakeholders I need for my project to achieve what I need it to?

o Am I ready to risk first impressions and bring what I’ve done to new audiences?

o Am I prepared for a follow-up release / my next move if things go well?

o If I asked 100 fans what they loved most about me and my work, what would they say?

o What’s unique about who I am or what I’m doing that’s having the most impact?

o How do those answers vary and change over time?

Our framework offers checks and balances to ambitious (and possibly overwhelmed) artist teams, helping them allocate what they’ve got to the right places, in the right order, to maximize long-term returns down the line. As artists and managers embrace their inner entrepreneur, the hunger for quick growth and fast access becomes more insatiable. Streaming and socials encourage as much.

But premature exposure to industry stakeholders and the masses writ large can do more harm than good in today’s consumption landscape, where most interactions between creators and consumers resemble digital window shopping. It’s never been easier to cross paths with potential fans and fade from their memory seconds later. This holds true for both first-time musicians and megastars.

Just as comedians test new material at small clubs before bringing jokes to Netflix specials, just as professional athletes spend more time practicing off the field than they do on it, creators maximize odds of success (or simply a lasting impression) by mastering what they hope to gain recognition for in the first place. That said, as with any order of operations, every component isn’t relevant for every situation.

While designed for developing teams, this visualization is really about restarts and iterations — two mainstay components of any rollout or rebrand. Recent ups and downs aside, Kanye’s career speaks to the undying need to recalibrate and reupholster your foundation. His album-to-album shifts reflected substantial investments in sound, expression, stage design, and collaborative feedback before anything was approved to ship to market.

Plenty of success stories start with half-baked ideas and skipped steps. There’s no one formula. But, if ever in doubt, it helps to take a step back and look at spending money through a methodological lens. Now that we’ve got this down, we’ll focus on real-word examples from folks who know music management, marketing, and artistry inside out. Stick around for no fillers and lots of lessons. Tell us about your own clever money moves on IG and Twitter.

We’ve got 3 more ‘Decoded: Spending Music Smart’ pieces left to go. So, if you liked this one sign up for the AWAL Weekly to get more knowledge from smart people straight to your inbox.