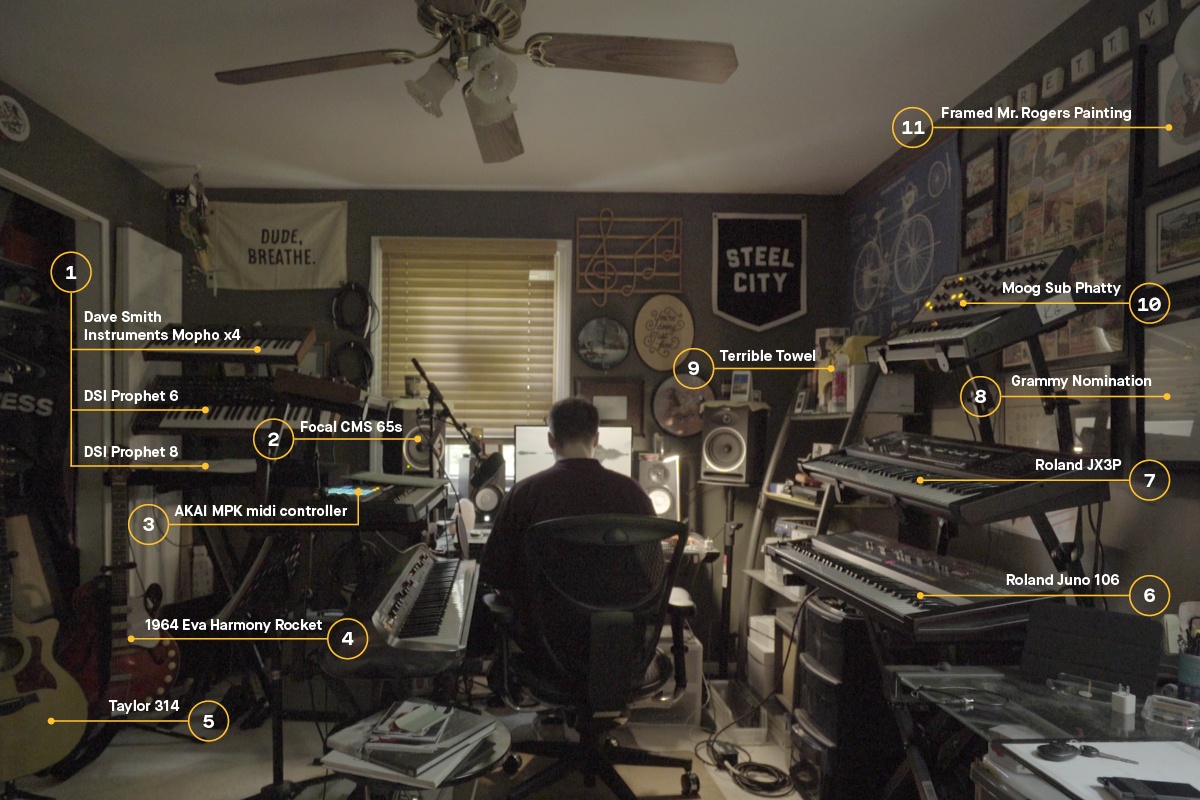 ’80s synths, vintage guitars, home city nostalgia and the comforts of the familiar lend themselves to Kevin Garrett’s inimitable sound.

In our new video series SPACES, we spotlight how one-of-one artist environments shape the creative process. If you caught Episode 1, you’re already familiar with Kevin’s Pittsburgh hideaway, peppered with personality and stocked full of some very legit gear. Lucky for us, he was gracious enough to go a bit further and break down the specifics of his space. Scroll on for the details.

1) All three of the synths on this stand are from Dave Smith. They’re all variations of the Prophet. Top to bottom are the DSI Mopho x4, the Prophet 6, and the Prophet 8. They all offer classic and contemporary analog synth sounds in different capacities and voicings that I’ve used on almost everything. The Mopho I used to take everywhere with me, live and studio. The Prophet 6 is probably the one I use the most out of those three.

2) These are Focal monitors from their CMS series. I think they are CMS 65s. They deliver a nice warm sound that really matches my workspace. These were the first pair of monitors I bought. I love them. I still use them all of the time.

3) This is an AKAI midi controller. It allows me to play some sounds I make on the computer via samples or other synthesis.

4) This is Eva, a 1964 Harmony Rocket. She doesn’t go outside anymore ever since Aer Lingus cracked her on a flight to Ireland.

5) This is a Taylor 314. My dad bought it for himself and I eventually stole it. Thankfully he didn’t get mad. I’ve probably had this guitar for 15 years. I still write a lot of songs on it and use it live.

7) This is another Roland synth, the JX3P. It’s from the early 80s, and has a nice set of onboard sounds I like to manipulate with pedals. There’s also some broken circuitry that gives off some cool noise that I like sampling.

8) I got nominated for Album of the Year at the Grammys thanks to the song I wrote on Lemonade. We lost to Adele. It’s okay.

9) There are a lot of little Pittsburgh-influenced things hanging in the room and on the shelves. This is a Terrible Towel. I’m a hockey fan but everyone in Pittsburgh has a towel.

10) This is a Moog Sub Phatty bass synthesizer. I’m not a bass player by any means, but if synth bass is in the cards, this synth is where I live.

11) My Mr. Rogers picture is a small representation of my appreciation of one of my favorite childhood TV shows. Fred Rogers and Andy Warhol are two legends that called Pittsburgh home at one point.

Don’t forget to keep up with industry news and dive deep into artist stories with AWAL Weekly, our Tuesday newsletter. Click that subscribe button for top-notch posts delivered straight to your inbox.