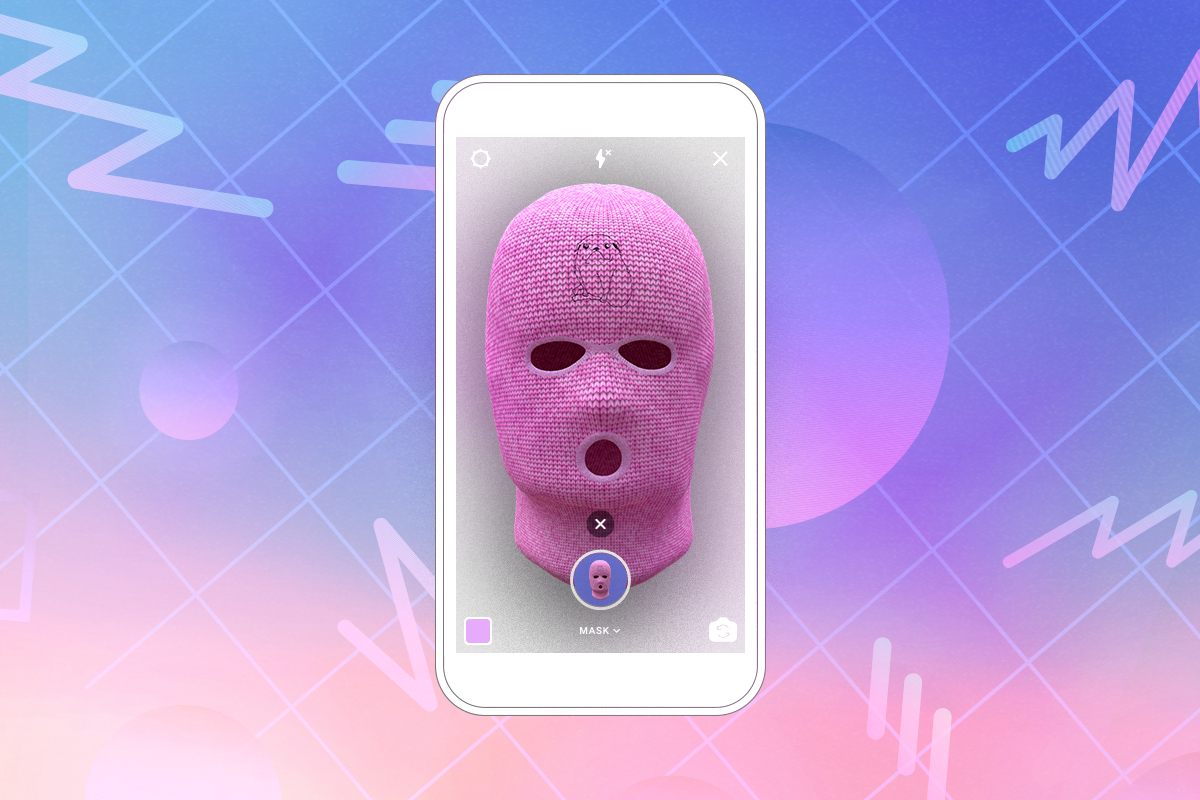 Augment THIS: The Social Power of Pink Balaclava AR

Remember Mayfair, Rise, and X Pro II on Instagram? Remember the pride of posting an image good enough to make them irrelevant? A lot’s changed since sharing photos with basic alterations was enough to mint billions of dollars. Now we can have our futures predicted and play with dragons in our Stories!!! Take that, 2012…

AR filters are a new kind of social currency, made possible by many decades of government research, sci-fi dreams, and kids’ toys: View-Masters, early flight simulations, Star Wars, Tron, motion-tracking military headsets, flopped ‘90s SEGA prototypes, PTSD treatments, Google Street View, Oculus, Magic Leap — the list goes on long enough to inspire a Vanessa Carlton song. All of this stuff is ultimately why you had the privilege of watching 100 of your friends post “In 2020 I will be…” roulette results during New Year’s week. It’s also why 1000s of people can rock virtual pink balaclavas with puppies on ‘em, spreading Scottish artist Joesef far and wide.

It’s been just over a year since Facebook first integrated its Camera Effects Platform (you might know it today as Spark AR) with Instagram, and less than six months since the private beta program went public. The company’s endgame is clear: Let anyone with WiFi access hop in the digital sandbox (Spark AR) and try their hand building AR filters. No coding required. More filters, more creative / personalized content, more time spent within the Facebook ecosystem. The same goes for competitor platforms, such as Snap’s Lens Studio.

It’s still early days, comparatively, for easy-access social AR tools, but usage has already increased exponentially. To give you an idea about the shift in volume, it helps to look at queue times for filter submissions to Facebook’s approval process. Coveted developer Ommy Ahke told Verge last November that not too long ago, her filters would publish to Instagram just a few hours after sending them off for review. Now, a submission on the first of the month might not receive the green light until the very end.

There’s no telling how long this wild-west phase will last. Facebook has liberally cleared filters for takeoff that incorporate unlicensed intellectual property, e.g. Arno Partissimo’s mega-hit, “Which Disney Character Are You?” (Elsewhere, in a neighboring galaxy of the world wide web, Disney is demanding that Etsy shuts down sellers of Baby Yoda merchandise.) As with anything involving innocent-enough-but-technically-illegal IP co-opting, the same ancient debate will rear its head: Does free publicity and vested fandom outweigh the money left on the table?

While the good times roll, though, music marketers are leveraging AR filters to (1) make custom, living, breathing brand touchpoints for artists and their fans — a digital playground for those in the know — and (2) capitalize on a new form of IG virality. Because AR filters in Instagram Stories are credited to their creators, many users end up on the creator’s profile page to test it out for themselves or add the filter to their own library. This makes the impression-to-follower conversion easier as a popular filter ripples across different freind groups. Filippo Soccini, the mind behind the aforementioned “In 2020 I Will Be…” filter, jumped from 7,000 followers to over 125,000 as we transitioned into a fresh decade. There’s fun to be had and fans to be made and *squints* blank t-shirts with AR compatibility to be sold.

Back to Joesef. It’s been all eyes on the ascendant lover boy since the start of 2019. He capped a kinetic stretch — multiple sold-out nights at Glasgow’s staple venue King Tuts, Elevate honors from GAY TIMES x Apple Music, millions of streams, etc.  — with Play Me Something Nice, which basically sounds like falling in and out of love with a boy for the first time in Bikini Bottom (this is a very good thing).

Before the project released in October, Joesef and his team (hi) stormed their brains to think of different ways they could best allocate his marketing budget.

“We wanted to take a less-is-more approach with social campaigns around Joesef’s EP,” says Ariel Cohen, a digital wizard at AWAL. “We didn’t want to throw money at 20 cheap, contrived engagement initiatives, but instead a small handful of engaging thing fans could play with. We had talked about toying with Spark AR and were looking for ways to do something recognizable, making an association between Joesef and something else.”

The ideal: Amplify a distinct element of the artist’s world by using AR to make it real. It didn’t take long to realize the answer was clear as day. Joesef had created a small run of pink balaclava face masks that made heads spin everywhere it appeared. (The embroidered likeness of his pup, Frank, adorns the top of the garment.) What if everyone with an Instagram account got to give it a try?

After research and referrals, the team worked alongside AR firm PHNTM to produce the idea. Both sides ultimately agreed on these priority functions to include:

The simplest version of the pink balaclava filter would still serve as a nice treat for fans of an emerging artist. That said, going beyond baseline interactivity gave Joesef’s mask more staying power. Cohen estimates that about a quarter of the budget went to mouth-mirroring.

“The range for fair price for this sort of thing depends on who’s making it, their experience, the level of interactivity you’re after, the number of delivery deadlines, and the number of edits you’re looking to make,” he tells us. “You might be looking at anywhere from $2,000 on the low end to $10,000 for more complex Spark AR builds. They’re not cheap but they last awhile if you do it right.”

The upfront costs (and the potential for less impressions than you might see after traditional ad buys on Instagram) might scare off many. To be fair, for now, AR filters are still nice-to-haves — massive boosters if a clever idea resonates, but just as easily a flash in the pan. Younger teams need not rush to throw all of their hard-earned cash at Spark AR. That said, the benefits speak for themselves. In Joesef’s case, the filter that (1) functions as a world-builder that lives beyond the lifespan of any particular release (2) builds social awareness among those not yet onboard and (3) will undoubtedly drive physical merch sales when it’s time to restock the actual pink balaclava. The more symbiotic the relationship between an artist’s digital presence and IRL ambitions, the more fruitful the outcome is bound to be.