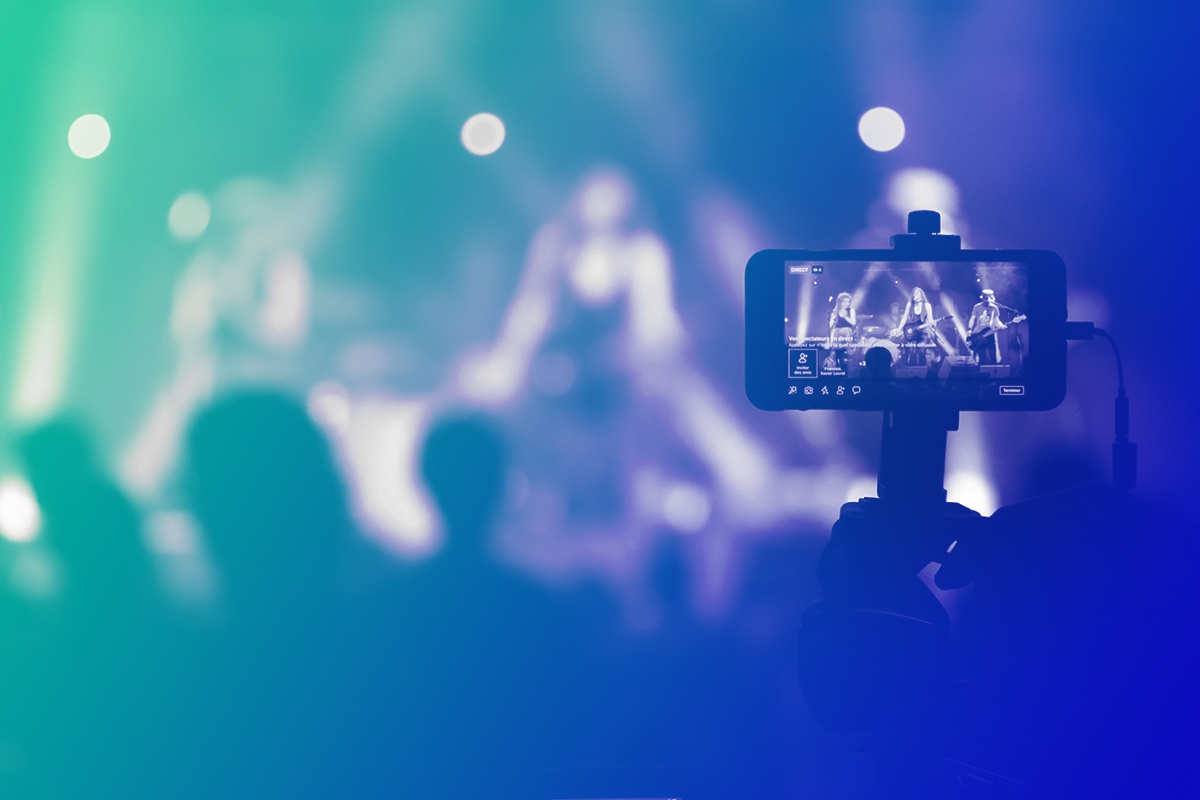 There’s a lot of buzz about streaming right now, and for good reason. Obviously, DSPs like Spotify and Apple Music have made access to music easier than ever, but another breakout medium in the streaming realm has given artists new ways to express themselves and connect with fans — video.

“Identifying your brand as an artist is a huge part of establishing yourself and connecting with your audience in a personal or creative way in order to really tell the story of who you are and what you’re trying to say with your music,” says Ashley Harris, [Digital Marketing Director]. “With video, you can set the narrative in a way that’s more than what people would normally get out of your music.”

AWAL artist Emma McGann discovered that live streaming elevated her profile and helped her build relationships with fans after she started using video platform YouNow. “I turned to daily live streaming to develop myself as an artist and to connect with my audience, something not many other artists were doing at that time,” she says.

“I wanted to harness that raw, live environment and show my fans the real me — no smoke and mirrors, no script, just me and a guitar. And the audience loved having that connection.”

From creating shareable, repurposable content to generating an additional stream of revenue for your music, the benefits of live-video streaming through social media are constantly growing. “Video has really opened up a way for people to actually see and have a personal experience with an artist without physically being there,” says Harris.

To help you make the most of your next video stream, we’ve gathered this list of four popular platforms that we’ve seen work well for our artists to engage their fanbase. Check them out below along with a few tips, tricks, and best practices.

Along with creating a strong Facebook profile that supports your brand as an artist, “going live” engages your fans directly and personally. In fact, studies show that users spend three times longer watching Facebook Live videos compared to regularly shared and posted video content. As a bonus, Facebook’s sometimes-brutal algorithm favors Live videos (even after they’ve ended) because the increased viewing time means that the platform deems Live videos quality content your fans and friends want to see.

To make the most of Facebook Live, Harris recommends setting up an RSVP system and inviting fans to tune in at specific times to catch your broadcasts. To take this a step further, try to go live at the same time every day. For example, if you’re on tour, let your fans know you’ll be live at 5:00pm on show days then invite them to RSVP. “If you create events like that, people will start to tune in as they would a TV show,” says Harris.

AWAL artists The Wombats built up extra hype around the release of their recent album, Beautiful People Will Ruin Your Life, by listening to the premiere in real time on Facebook Live.

If you’re going live with a specific purpose in mind (like promoting a new track, for example), mention it more than once to hit those who join the broadcast late. And, as far as how your Facebook Live videos look, concern yourself with content over production value. “A personal touch is actually going to catch people’s eye more than something that looks like a commercial or something super stylized,” says Harris.

When you’re live, make sure you’re on for at least 10 minutes and outright request engagement in the form of likes and comments. Try asking fans to “hit the heart icon” if they want to hear a specific song, asking them questions they can answer in the comments, and addressing them individually. “The minute that you acknowledge a fan that’s in your comments, it really does make a huge difference,” says Harris. “That’s where you get your super fans.”

Though some might think of Instagram purely as a platform for posting static images, its video views actually increased 80% in 2017, while the amount of videos produced increased four times from the year before. Users watching Instagram stories are also on the rise: 300 million ‘grammers are checking out the temporary, snackable posts.

Whereas Facebook Live might require a bit more planning, especially if you invite fans to RSVP ahead of time, Instagram Live works just fine “on the fly,” says Harris, because of the platform’s mobile nature; in contrast to Facebook, there’s no real desktop equivalent for Instagram. And, if your followers have push notifications turned on for Instagram, they’ll be notified when you’re live, no matter where they, themselves are.

Going live on Instagram also presents an interesting opportunity for collaboration. “If you are an artist who worked with another artist on a project, you can start your live video and then invite them in,” says Harris. “Then, it becomes a two-person, dual-screen experience.”

For Instagram Stories, the key to engagement and upping your game is “literally in the name — Stories,” says Harris. In some cases, it might help to think of your Story as a “multimedia magazine” with a beginning, middle, and end of a narrative. Combine static images with a video explaining what you’re about to do, and then a mix of photos and video content making up the meat of your Story.

If you’ve shrugged off Snapchat in the past because of its young userbase, you might be surprised to learn that the majority of the platform’s 187 million daily active users are aging up: 37% of its users are now in the coveted 18-to-24 demographic. At the same time, artists and brands alike are making Snapchat a key channel for not only marketing but also building relationships.

An interesting fact to note is that although 80% of people who use Snapchat also use Twitter, 40% of Snapchatters don’t use Facebook, 48% don’t use Instagram, and 70% don’t use YouTube. More critically, 60% don’t use any other platform.

That means that it’s up to you to meet these users where they live — only on Snapchat. Take into consideration that users open the app 25 times a day for 30 minutes on average and you’ve got a pretty solid chance of establishing a connection.

The key to grabbing those eyeballs, says Harris, is keeping your audio is on by default. “With Snapchat,” she says, “you want to talk right away — within the first two seconds. Say who you are and what it is that you’re doing.”

When it comes to Snapchat content, keep it real and personal. And if you’re thinking of running ads or sponsoring content on the platform, make sure the look and feel of the video or images isn’t overly stylized. Some of the best ads, says Harris, look so similar to content posted by friends that it’s sometimes hard to tell the difference. Try to hit that same seamless feel with every promotional post.

Taking the place of Snapchat as the digital hangout for a younger demographic, Musical.ly has quickly gained notoriety as a video-streaming platform — one that’s produced its own set of superstars and raised $100 million in funding. The crux of the platform centers on “Musers” making 15-second video clips of themselves dubbed over tracks.

“The style is a lot like Vine,” says Harris, referencing the dearly departed video-clip platform. “It’s choppy and quick, and people scroll through like Instagram Stories, but there’s music involved.” That presents a variety of opportunities for artists on Musical.ly. One, it’s possible to have your own music added to the system for others to cover. And, of course, you can also lip sync to songs in the platform’s system.

AWAL artist Lauv does a great job sharing quick and digestible snippets, like preparing for a big show, with his fanbase via Musical.ly.

“The key is that you do need to be engaging with the app,” Harris says. “Your music can be up there forever, and people might find it, but it’s really about you creating content for the app. If you’re loving it, and it does make sense for your demo, tell your other social platforms that you’re on it, because it just naturally sort of creates that community.”

While Musical.ly itself isn’t a live-streaming platform, its sister platform, Live.ly is. And, importantly for artists performing over its interface, Live.ly features a tipping feature. Some top Musers make thousands of dollars from their Live.ly streams with reports of some earning upwards of $46,000 over a two-week period.

One important point to note is that, like Snapchat, Musical.ly is self-contained. “It is sort of its own ecosystem,” says Harris. “A lot of times, you’re probably going to be reaching people who aren’t going to be on other platforms.”

Remember that, before going live on social media, it’s crucial to choose a goal and a target audience. Depending on what you’re trying to achieve and who you’re trying to reach, one platform may perform better than another. Also, creating a plan — even if it’s a simple, loose outline — will help guide you during your stream and help realize whatever goal you’ve set.

Above all, make sure that video is part of your strategy — period. “Video is the future,” says Harris. “If you’re not making video content, you should be, because people want to see how you see the world. Shooting in a very natural way is going to go a long way.”