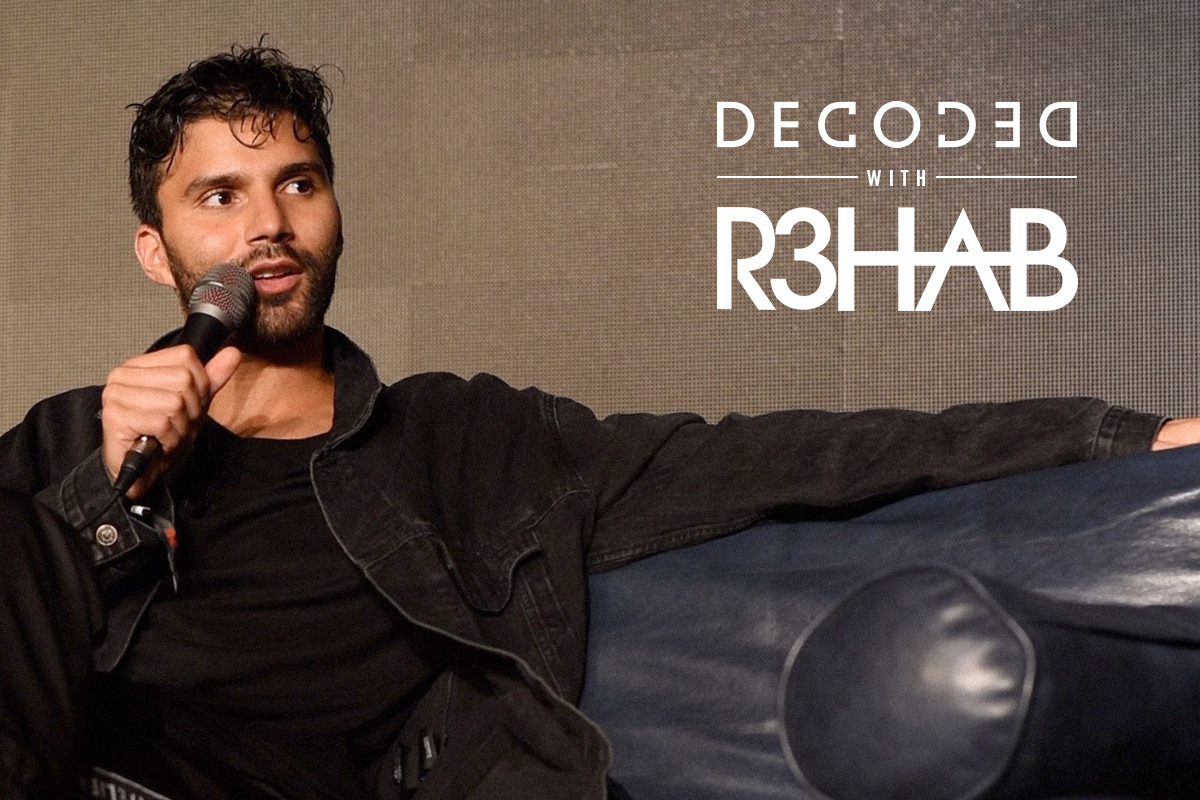 It’s tough to talk about Fadil El Ghoul without running out of breath. The DJ / producer / remixer / globetrotter / business owner known to most as R3HAB has charted his own course to the electronic zeitgeist, retaining control and autonomy for much of his decade-long road to legend status. 10,000 hours of sessions and stages helped make him a millionaire. His exec-level mind will take him further still.

Nearly a billion streams later and songs new and old still put numbers on the board, propelling recent ventures — like his indie label CYB3RPVNK — with resources and reach. So, what is there to learn from this Dutch magnate in the making? Prolific industry analyst Cherie Hu (Billboard, Forbes, Pitchfork, etc.) sat down with him to answer exactly that. Open your Notes app and dig in with these core 12 lessons that touch on international marketing, record advances, budgeting, and more.

1). Watch for new platforms & tech, then analyze the pros and cons of jumping in.

When I finished my marketing degree, I was arguing with the teachers because it was exactly the time when it was moving from traditional marketing. Facebook just started and they didn’t know anything about it. They were like, “Oh, that will never be big.” And I told them to watch social media become huge. So I didn’t learn much from marketing, but the basics, seeing if things are a good financial return on investment, I learned that part.

I’d do a SWOT analysis on these things — strength, weaknesses, opportunities, threats. Back then, it was the type of billboard to use, but the attention span is very short. It’s very quick marketing right now. One campaign would run an entire year. And now I feel like if a campaign is running for three weeks, we need to switch it up. One thing we’ve learned is that ads tend to be cheaper when platforms have new features. When Instagram Stories first came along, not as many people were using it so it was more affordable to advertise on.

I tour all over the world, Asia, China, the marketing needs to be completely different. We use different colors. We translate. The videos are different. The songs we use are different. I can use AWAL Analytics to see what’s big where. Before we go on tour, we have a little meeting about that and say, “This song’s working well there, let’s make a special version of it for that region.”

I don’t want to give up all the secrets, but if I make an instrumental banger, we definitely do more Asia-based ads now, and Eastern Europe. Maybe it’s the language barrier and the melodies transcending that. I’d release different songs and notice one’s performing better in Indonesia than the States and vice versa. I won’t do Facebook ads out of principle now because I feel they cut off my page reach. We invested a lot in building that early and now it’s hard to reach anyone.

3). And consider tailoring your management to different territories, too.

Some of the people I met on the road became team members. People who had been helping with bookings who now help on the management side. If you meet people along the way who are quick and get it, consider bringing them on.

4). Expect low payouts when you first tour in new or developing markets. Then expect big returns down the line if you prioritize those emerging regions early.

It’s painful to go into a market early, when a genre isn’t popular. I was touring China in 2011 or 2010 for low fees, just enough to cover flights, but I wanted to study the market, see what they liked. They only liked my remixes for Rihanna and Lady Gaga. They hated my originals on the dance floor. But every time I went back the percentage of people who liked the originals went up a bit. I went back two or three times a year, in 2011 and 2012. I was one of the first electronic artists active on the streaming platforms there and now I have one of the biggest accounts on the platform. The shows might not be amazing at first, but it’s important.

5). Let fans illuminate trends, platforms, and feedback you might not catch yourself.

I do meet-and-greets after every show, for 30 minutes. I found out about different streaming platforms around the world by asking to see fans’ phones. That let me get on early. Now I’m big on NetEase and Weibo. I’d ask my Chinese friend to translate that stuff for me. It was hard, but when it’s hard, that’s when most people aren’t willing to put in the effort. That’s what it takes.

6). Work with teams that let you stay nimble and encourage transparent conversations.

At my old label, if I were to request a change to a release date, it would take like 500 emails. With AWAL, it’s one email, even if your weeks away from release day. It lets you be creative and strategic. There’s a lot of snakes in the music business. When you’re looking to make a deal, ask yourself, ‘Do I really want this? Is it good for me right now? Do I need this money?’

If you don’t need it, make sure it’s a deal you absolutely love. Do you really need that car? It might be a big check now, but where will it be in three years? People are borrowing money on 5% or 6% interest rates, that’s an advance.

7). Make educated forecasts about future music income to allow yourself a smart budget.

The last hit song I had came out last January; it’s done 100 million streams. I haven’t had one this year, but my numbers are still growing because all my records I’ve been releasing are compounding. I’ve had maybe 10 old records at 30 million each, so 300 million streams. That creates a base income. I’m lucky. Maybe because we’re Dutch, but we’re like, if this does 10 million streams, we’re happy.

We have this rule to make an Excel spreadsheet before the record gets released, where we look at the likely amount of streams it might generate, then we do the math. Say we expect 10 million streams, or $20,000 in revenue, whatever it is. Then we can say we can spend $15,000 on a video and $5000 on marketing. We break even. We’re happy.

8). Recognize the connections between creative decisions (a feature) and profit margins.

When I’m making an instrumental and it’s just me, I’ve noticed the revenue is easy. It’s pure income. The more I can do myself. It gets expensive featuring artists, flying people in for recording sessions, rerecording. Sometimes it’s worth it, though. Some of those records have lost money but it’s fine. We’re growing our following through them, and they help fuel the shows.

9). Look at saves, engagement, and mailing lists to gauge your true fan health.

You always look at playlists, if you made New music Friday. I looked a lot in the beginning, but now I look a lot less. I’m more focused on what my fans think on social media. If those followers are growing, but the streams are growing a bit more slowly, I’m still happy with that. The record I had that hit 100 million streams wasn’t even on very big playlists. It hadn’t really been on anything with four or five million followers. The saves were insane.

Active plays are important because some big records that get big because of playlists, lots of people listening don’t actually know the song. I look at Shazams too, and how a song’s doing on one platform compared to another. If you get on a playlist and the record’s shit, it’ll be out in seven days. We do a newsletter subscription that’s become a pretty big database, that helps a lot. We can see who our real supporters are.

One thing that’s dangerous about metrics is the temptation to judge prematurely. Sometimes you hate a song the first week it comes out then you start to love it, as a fan. So, if you, as an artist, only look at the first week and you’re discouraged, and you give up, you might be missing its potential.

11). Decipher how your audiences on different platforms vary from each other.

Hard ticket sales, seeing where they come from, having a big first day of ticket sales on Spotify presale — I assume those are real fans. People who follow you and post Stories of your show. But I sold out a show with 3000 tickets and then I looked at the Stories people posted of that night, and many of them didn’t follow me on Instagram. Maybe they just follow me on Spotify and they’re not interested in my photos, my lifestyle, just my music. Some people get 1000 likes on Instagram and sell 10,000 tickets. We’ve gotten pitched before to do a feature with someone who has 15 million followers on Instagram. However, how does that correlate to the music, though?

12). Grow into a leadership role on your team as early as you can.

You have to be responsible for yourself. If you’re not delivering on your end, management, AWAL, a major label, they can’t deliver on theirs. In the beginning of my career, I would like to complain a lot. I might get pissed sometimes but I try to keep it moving. I don’t get overly excited to let down now. I’m in the middle. I’m happy if something sells out, that’s awesome, but you have to keep going and have fun with it. Your happiness isn’t the same thing as the music’s performance.