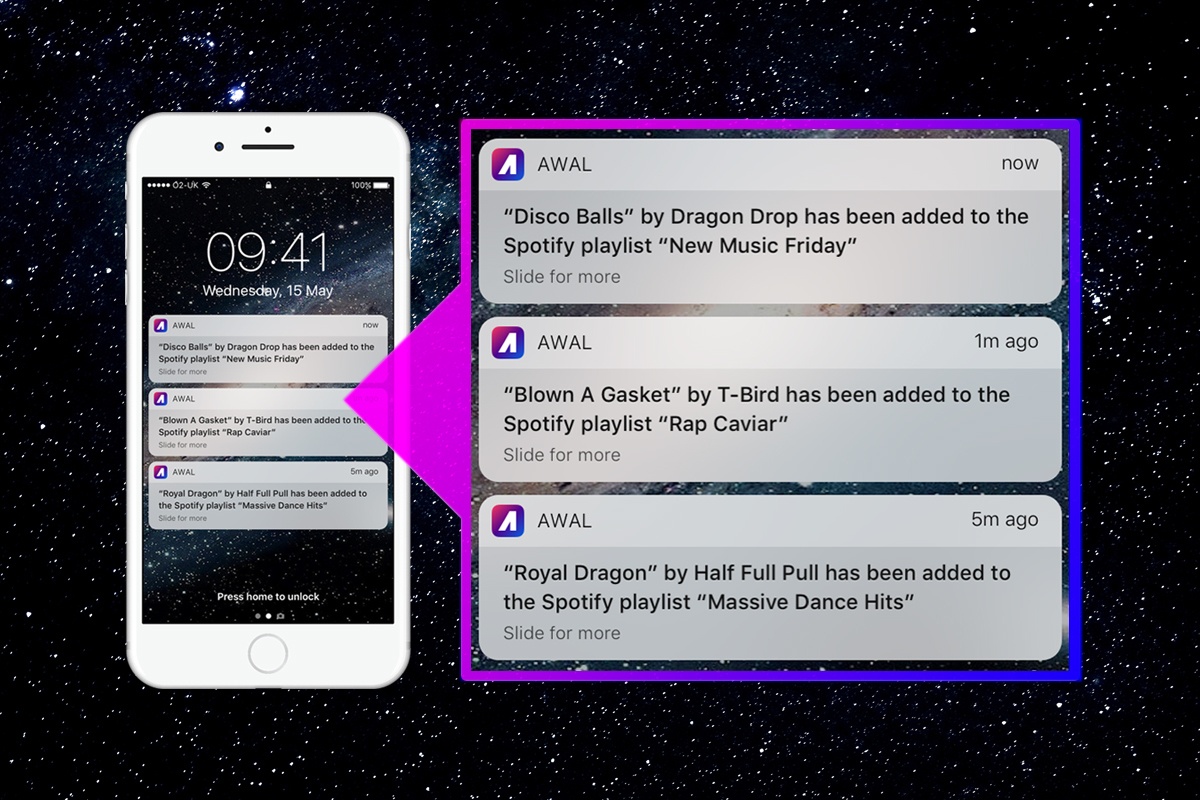 The Easiest Way to Share Major Playlist Adds with Fans

Independent artists have countless things to juggle, from music creation and maintaining a social media presence, to playing actual gigs and keeping in touch with the the managers, agents, promoters, and publicists that help make it all happen. As an independent artist focusing on music creation and staying relevant, something that you simply can’t afford to let fall through the cracks is keeping track of when your music has been added to a new playlist on a popular streaming service.

Making it onto a playlist, whether by chance or through a connection and hard work, is like striking exposure-gold these days. The industry — and that includes both people in the music business as well as consumers — recognizes the inherent value of getting added to a playlist (provided they aren’t living under a rock), and it goes without saying that it’s worth sharing that achievement with your fans when it happens. The AWAL App makes it super easy for artists to do just this, offering push notifications every time you get added to a hot playlist, and allowing you to share the good news directly with your fans across social media. Since launching at the end of March, we’ve sent thousands of notifications on a weekly basis.

2. Tweeting out your track that was added to the playlist during the most “chill times” of the day like a lazy Sunday afternoon, etc. Pay attention to our tips for getting your first 1000 Twitter followers to learn more about the best ways to grow an audience on Twitter so when you share your playlist adds even more people are listening.

3. Looking into similar “chill mood” playlists that your song could be well-suited for, research who runs the playlists through a little social media stalking or online digging, and reach out to them. Unfortunately, you can no longer message other users on Spotify, but with a little research you can find their socials handles or email address and use your first playlist add as a vouch for why you’d be an asset to their playlist.

4. Posting “chill” photos on Instagram or Facebook to promote your newfound “chill” vibe. Definitely a #fun and #hip way to take advantage of your chill-ness.

Having a strong social following in advance of getting added to a playlist will garner great engagement from your fans. For example, former President Obama got roughly 42,000 total unique engagements, not including impressions, when he tweeted his “vacation playlists” in 2015 — and that was only three months into using his new @POTUS Twitter handle (now @POTUS44).

Obviously, we don’t all have the following of Barack Obama, and the playlists we are involved with may not be international news. Regardless, there’s always room for improving your social following in hopes of eventually achieving such support. To be frank: you should take full advantage of a buzzworthy playlist moment by tagging and thanking anyone and everyone involved in the process on social media in a genuine way, without overkill, and in good faith. An easy win is just to tag the streaming service. Spotify and Apple Music love to see the support about playlist adds. If you can prompt a retweet from Spotify with 2.27M followers or Apple Music with 9.18M, that’s a major win for garnering some extra exposure.

Additionally, trying to tracking down the playlist editor’s Twitter handle (whether it’s an independent person, a label, another artist, etc.) and thanking them for the add by including a link to the playlist alongside a note is almost a guaranteed retweet, depending on how much engagement the user is already getting and pending they notice the mention. These practices are a surefire way to get retweets, exposure, engagement, and hopefully even more followers.

You can do the same thing on Instagram and Facebook. In this situation, it pays off to do your homework. If you’re really lucky, that influential user might follow/Like you back, join your email list, and stay abreast of upcoming releases from you for potential inclusion in their other playlists. In other words, you could make some special internet friends.

Overall, promoting your playlist adds to followers, and generating more listens on your tracks can even have an effect on your position within the given playlist. Increased traffic to your music can sometimes influence editors to move your track higher up the playlist to a more prominent position. If you can generate a significant spike, it can even sway editors to add your track to even more playlists, altogether. So, when you’ve got playlist news — share it!

All in all, the easiest way to take advantage of your playlist adds is with the AWAL App’s notification feature — a tactic that will only work in your favor without taking away any time away from your already-hectic life as a touring artist. From receiving a direct notification that you’ve been added to a playlist, to sharing across your socials with your followers, it could take only seconds to gain infinite exposure, thanks to the app’s simple features. Not to mention the audience stats you’ll gain from AWAL’s performance and fan insights sections, which are invaluable to your growth as an independent artist.