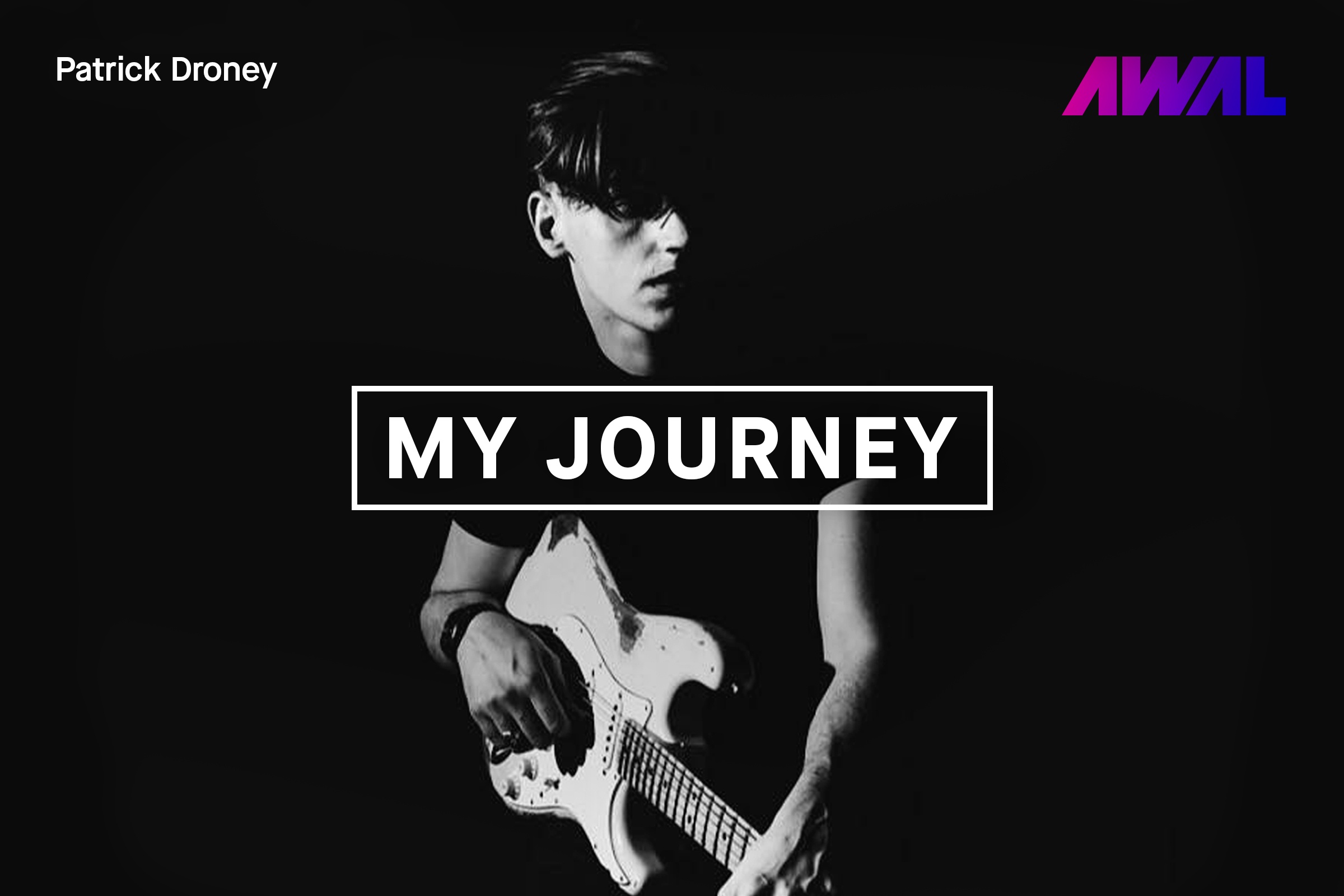 Persistence breeds good fortune. It’s no surprise, then, that opportunity circled Patrick Droney since his teenage days, when guitarist awards and tours with blues legends became nothing to brag about. Every decision since—college major, day-to-day hustle—has reflected long-game strategy. Each relocation connected new dots, bringing him closer to solo spotlight.

Those dots aligned and learnings merged in July with “Stand and Deliver.” Droney commands the mic on his debut single, quickly proving why he’s attracted top-class partners across management, publishing and label services. Between sessions and release preparations, the alternative singer-songwriter spoke with AWAL about his buzzing single and his first-ever EP, out tomorrow. Keep reading for this music virtuoso’s ruminations on practice, balance, and what it takes to make collaboration seamless.

We’d imagine that kicking off your career so early afforded you incredible memories and invaluable experience. Was there any disadvantage or negative that came from your head start?

I don’t think you can ever regret experience or perspective. I will say, being so in tune with what you want to do with your life at such an early age is a burden as much as it’s a gift. The reality is you have to put in the time and earn your place if you want to last or have anything that can be considered sustainable. Touring with my heroes as a young guitar player was a blessing, but I knew out the gate that if I wanted to be taken seriously I would need to write songs and sing them. The hardest part about that was that it was going to take time. To have natural talent and skill is one thing, but to harness it with intention and transcend the bare ability takes living and experiencing. It takes matching that skill with a message and a voice. Fifteen years into it I feel like I’m finally at the place where I am doing that. When you dive in as early as I did you’re bound to have a long journey to the beginning. I’m really glad it’s here.

Did you ever receive advice from BB King or James Brown when you toured with them as a guitarist? What was your #1 takeaway?

B.B. King passed the torch to so many countless young musicians. He knew that the only way for the Blues to live on was for him to give permission, via encouraging and championing a new generation of players. I remember him saying, it’s not about how much you play but how much you mean. Making one note hold the power of one-thousand. I think that’s why I’m focused on intention and not doing something for the sake of doing it, but for a deeper purpose. Those guys gave me a true reverence for what came before me and afforded me the opportunity to do what I do.

Have your idols evolved as you’ve grown as a musician? In what area (if any) are you trying to grow as an artist?

Absolutely. It started with guitar players and quickly turned into songwriters like Jackson Browne, Springsteen and Joni Mitchell. Once I heard Prince’s records and started thinking about the artist writing and producing their own records my mind kind of exploded. I dove deep into who produced my favorite records, which artists had the biggest hand in their projects, what session cats played on them and figuring who was turning knobs behind the board. I found idols all across the assembly line. I’m striving every day for growth as a producer leaning into my instincts, as a writer delivering my message in the most authentic yet refined way and as a musician in every sense. Now more than ever you can look into the process of other creators and I’m inspired by them every day.

Why did 2018 feel like the right time to step out from behind the scenes? What went through your head when “Stand and Deliver” hit #10 on Spotify’s United States Viral 50?

After being so patient and working quietly but intentionally for so long, having the first song we released off the EP climb to #10 on the Spotify US Viral Chart was beyond validating. It was enough to see it next to artists I admire like Anderson Paak on New Music Friday, but to then open the chart and see the song at 14? It knocked me out of my chair. Watching it then climb to top ten felt like such a big win. It’s so important to me, mainly because that chart can’t be gamed – People are truly listening and we are moving the needle.

On a business level, being aligned with like-minded, passion-based individuals in every aspect of my career, from signing with my management team and booking agency, to partnering with Kobalt both, in publishing and label services, has made all the difference in feeling ready to step into the spotlight and make an introduction to the world. Being so confident in my music and my team makes 2018 feel like the year I’ve been waiting for.

For many people, the BTS world of songwriters and sessions is a mysterious one. What has to go right for you to fully enjoy a session?

Obviously, it’s inherently intimate to sit in a room with one or two other people (sometimes complete strangers) and go to through the depths of the emotional spectrum to write a song that matters, so it’s important for there to be a good energy in the room. Trust is so key. My favorite part of any session is the first 30 minutes of just talking. Often in that conversation I’m sitting with my guitar quietly scoring the banter and most times something is said that makes us go, “oh wow, yeah that’s what we are writing today”. Being open to that kind of gifted inspiration takes showing up and being present. Another really important part of the process for me is not letting the clock get in the song’s way. Sometimes it’s an hour and sometimes it’s the end of the day and you’re surrendering to the fact that there is digging left to do. At its best though it’s about finding your tribe of creators that click with you, and dusting off the fossil that’s been there all along.

It’s easy to only focus on streams in 2018. Can you speak on how you’ve diversified your income portfolio, if you will, through sessions, touring and brand alignment?

From as early as I can remember the term Renaissance Man resonated with me. Having a well roundedness to myself as a business entity is equally as important to me as an individual. I am a brand ambassador for Fender because I truly love Fender guitars, I am a songwriter for other artists, I stay active in the Film/TV sphere, as well as having a big picture goal of touring as the centerpiece of my career for as long as possible. The recordings, the playlists and the charts to me are all a means to get on the road and stay on the road. Authenticity within my music and my branding/partnerships is key for longevity in my growth.

You have an EP on the horizon (tomorrow), the first project with you center stage. Thinking back on its creation, what are you most proud of?

I’m most proud of the endurance it took to get here. It made every take, every song –  co-producing with one of my best friends Ian Fitchuk and having my band of brothers create it with me – mean an infinite amount more than if I was handed all the money in the world, with all the tools in the world, to go make a perfect record. We leaned into the moment, left dirt in it, put all the right intentions into moving people and walked away with a body of work that I hope will connect strangers to each other and to us. I’m proud to be honest.