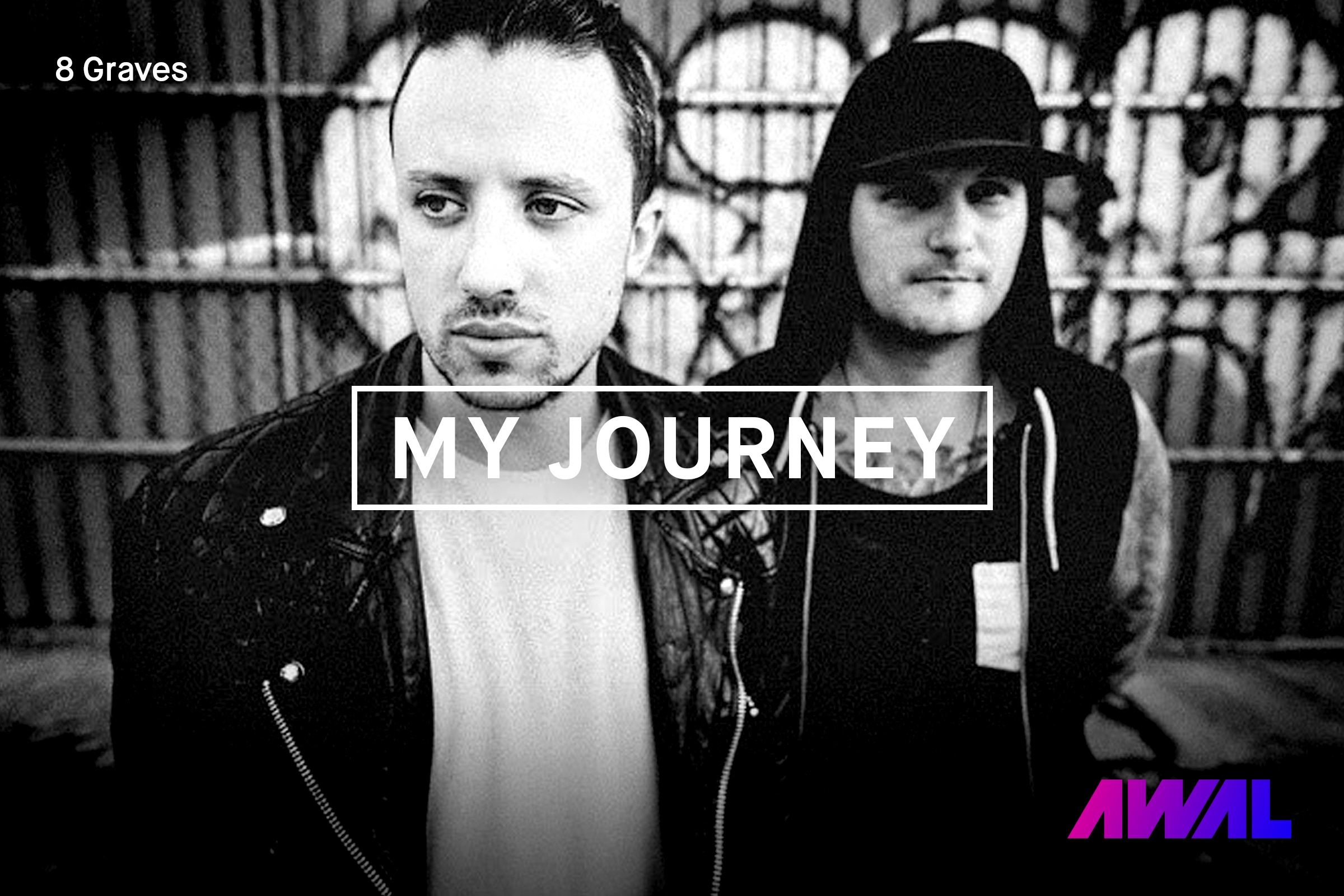 Nick [Goncalves] and I [Brent Carpentier] met at a part-time job at an electronics store like 12 or 13 years ago. One day, Nick brought in his guitar to play for customers. I saw him play, asked him if he wanted to make music together, and more than a decade later, we’re still at it.

We’ve been in a bunch of projects now, and it’s always us. We’ve played everything from post hardcore to EDM. I’ve screamed, rapped, and sang. Nick has been a guitar player and a DJ. But when our last project decided to call it quits, we took a little time apart.

I started writing songs that were more my style, which is more or less R&B- and pop-style vocals with dark lyrics, and Nick dove into production more than ever as an EDM producer.

That little time apart was really important to 8 Graves happening. I found my way back to who I really was as a musician, and Nick honed his skills to be a really top-notch producer. We were both creating on a higher level than we had ever been. The only real obstacle was that I was in a pretty dark place mentally.

I went to Nick because, in my head, I had decided to check into a mental-health facility. I felt like I was becoming a danger to myself, and I had a couple songs about it half written. I went to Nick and asked him, as a friend, to help me get them down. I wanted to get some of that off my chest, and wanted to have the songs to listen to during the time I was going to be away.

When Nick heard them, he saw something in them and asked to be my partner in crime once again. I held off going away to get some songs down and, next thing I knew, 8 Graves was created.

Nick was, once again, the only person that could drag me back from the edge. We felt like we had something musically special and, whether or not he knew it, it was literally saving my life. Now we’ve got a decent amount of material out there, and people are really starting to respond to it.

A journey might be the wrong word for us. Journeys are linear and sequential. Journeys have a beginning and an end. I make music because I need it to stay alive. Nick is living his passion. I know as long as I’m breathing, I’ll have to make music, and I know that Nick will always be there to help me, because he’s my best friend.

I don’t know that we think of it as moving along a course. It’s more like fighting to tread water so I don’t drown. We’ve decided to invite people to join that fight with us. The more that people support us and identify with our music, the less I feel alone. It makes me feel okay about being here.

So I don’t think I’m traveling along a journey’s path. It’s more like I’m on a treadmill, running for my life. So where we are now is hard to say. I guess we’ll just always be in the middle.

The biggest challenge to any artist is trying to find a way to stay committed and ignore the fear of failure. Nick and I know we have probably already given up a shot at having a “normal life.”  We don’t have savings, or houses, or plans for our future. Everything we do, we do it with one criteria: “Does this increase our creative capability?” Everything from the jobs we work, to the money we spend, to our living situations, to our relationships are handled with that priority.

So the challenge is to understand and embrace that while overcoming the fear of failure. You have to be okay with knowing that music is a long shot — statistics say it’s not going to happen for you — and still allow your life to spiral. Work a job you don’t like. Stay broke. Live basic. Stay free.

You have to be willing to keep your life streamlined and be prepared to walk away from everything and anything at a moment’s notice. You can’t have anything that slows you down while you’re chasing the dream. You can’t ever doubt that you’ll make it, or it becomes really hard to justify everything you sacrifice.

It’s faith in yourself bordering on arrogance. It’s confidence bordering on delusion. It’s a ton of work with, at times, no reward. That is, to us, the biggest challenge, and you’ve got to be a little crazy to accept it.

I think the release of our last single “Hang” has been the highlight for us. Sometimes when I write lyrics they’re super valuable to me, but I don’t think it’ll be something that people will gravitate toward. “Hang” was one of those to me — personally important, but I didn’t expect it to have the legs it’s had.

It’s by far the best response we’ve had to a track. Every day we wake up and see the numbers we’re doing on Spotify and are so thankful that a couple hundred thousand people have decided to give our songs a listen. All we ever wanted was to be heard, and we’ve been heard by more people faster than we’ve ever been. So, by definition, these last couple weeks have been a highlight for us.

The only milestones for us are creative ones. Getting to the next level of production. Writing a more complete song. We really don’t pay attention to anything outside of our own creative process. Anything beyond the music we make is out of our control, and projections of our own success would strictly be conjecture.

We are planning to release more music in 2018 than in any other calendar year. To us, that will be a milestone.

At the end of the day, all we want to do is be heard by as many people as possible. We want to spend as much time as possible playing and creating music. The rest is details to us.

As an independent musician, you always feel like the tiniest little guppy in this giant ocean full of sharks. It’s hard to feel like you’re making a dent, especially because a lot of the commercialism of the music industry pushes an agenda that hardly seems based on merit.

AWAL represents a shift in that — it represents an opportunity to be heard and supported based on the quality of your music and the work that you put in. It’s refreshing to feel that if you make a great song, present it in a cool way, and have people respond, you have a network behind you that can help your song get to the next level.

Sometimes as an artist, all you have is hope. AWAL gives you way more hope, and that means everything to an up-and-coming artist.