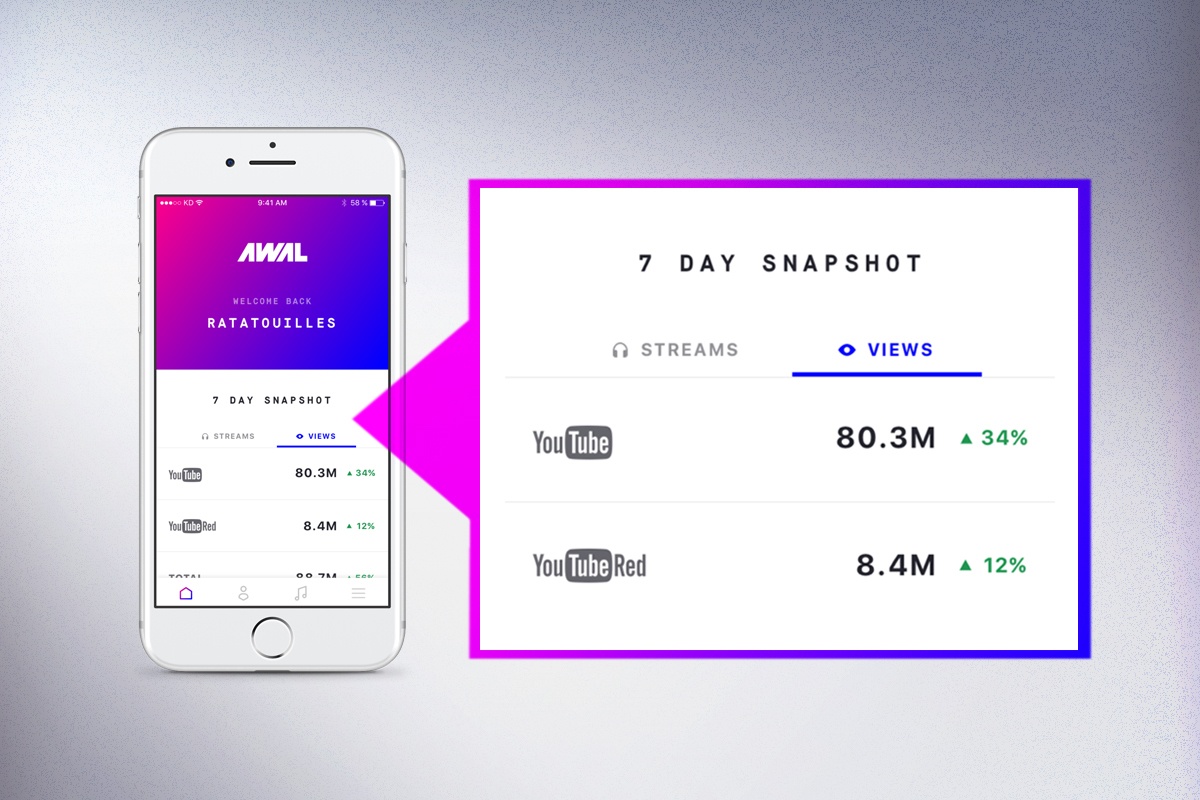 Get More YouTube Data and Insights with the AWAL App

YouTube is more than simply a platform to share your latest music videos and interview clips with fans. In fact, it’s become such a staple for artists that it’s poised to “come out quite aggressively to market itself more as a music service,” says Mark Newman, Senior Product Manager at AWAL, especially as it moves to integrate all of its streaming services, including Google Play and YouTube Red.

As the video-sharing platform elevates its profile for musicians, it’s more crucial than ever to pay attention to the analytics YouTube provides. Insights like viewer habits and even playlisting trends can help inform your entire marketing strategy and ensure you’re targeting the right people.

Luckily, AWAL is making it easier than ever to stay up to date on all of your YouTube data via our App. With its latest update (now available!), you now have instant, real-time access to video stats, including how your music being distributed by AWAL is used and monetized in all user-generated content (aka, UGC — meaning videos others make that include your music) and metrics including:

You’ll also be able to see views of videos on your YouTube channel that contain music being distributed by AWAL if you haven’t asked us to whitelist your channel — meaning, exclude it from our YouTube monetization service.

And, if AWAL is monetizing your YouTube channel on your behalf, you’ll see views of your videos that we’ve claimed on your behalf.

While basic YouTube analytics are fine for general content creators, this App update was created to specifically highlight data important to you, the artist. “We have created something more applicable to artists whose music is used on YouTube versus the people who are focused on putting up lots and lots of videos of themselves,” Newman says.

The need to disseminate these numbers arose mainly because many artists are using YouTube from an early stage, kind of like SoundCloud, to build big, engaged audiences. “As YouTube expands and turns its focus to music, it’s becoming more imperative that artists pay attention,” says Newman.

More than just analyzing viewership data, though, the App update helps tie your videos to top tracks across platforms, reveals your biggest songs on the service, and lets you know the top videos and channels in which your music is being used. Armed with that knowledge, you’ll have a better sense of where to foster relationships and which curators to reach out to.

Besides the obvious advantage of data that pertains specifically to you and your music, the App has the added benefit of housing all of your stats in one place, thanks to the AWAL App’s core data streams from major platforms like Spotify and Apple Music. Which means it’s easier than ever to compare numbers and understand if a track is performing well on YouTube, how that reflects on Spotify, and so on. All of these numbers work in concert (semi-pun intended) to provide you with a more comprehensive, thorough snapshot of how your music is performing and where

“We try to align it as much as possible with other data sets that we have and just get away from some of the more video-focused metrics, make it as simple as possible, and tie everything back to a musical context,” says Newman.

“While we’re seeing more DSPs start to provide their own analytics tools, they’ll never be able to combine data from multiple DSPs into one app like we can.”

Though many apps capture data that’s useful in a general context, the AWAL App is, and will always be, devoted to giving artists the insight that’s crucial and specific to them. With this update, you have access to YouTube analytics that pertain specifically to you as an artist — possibly for the first time.