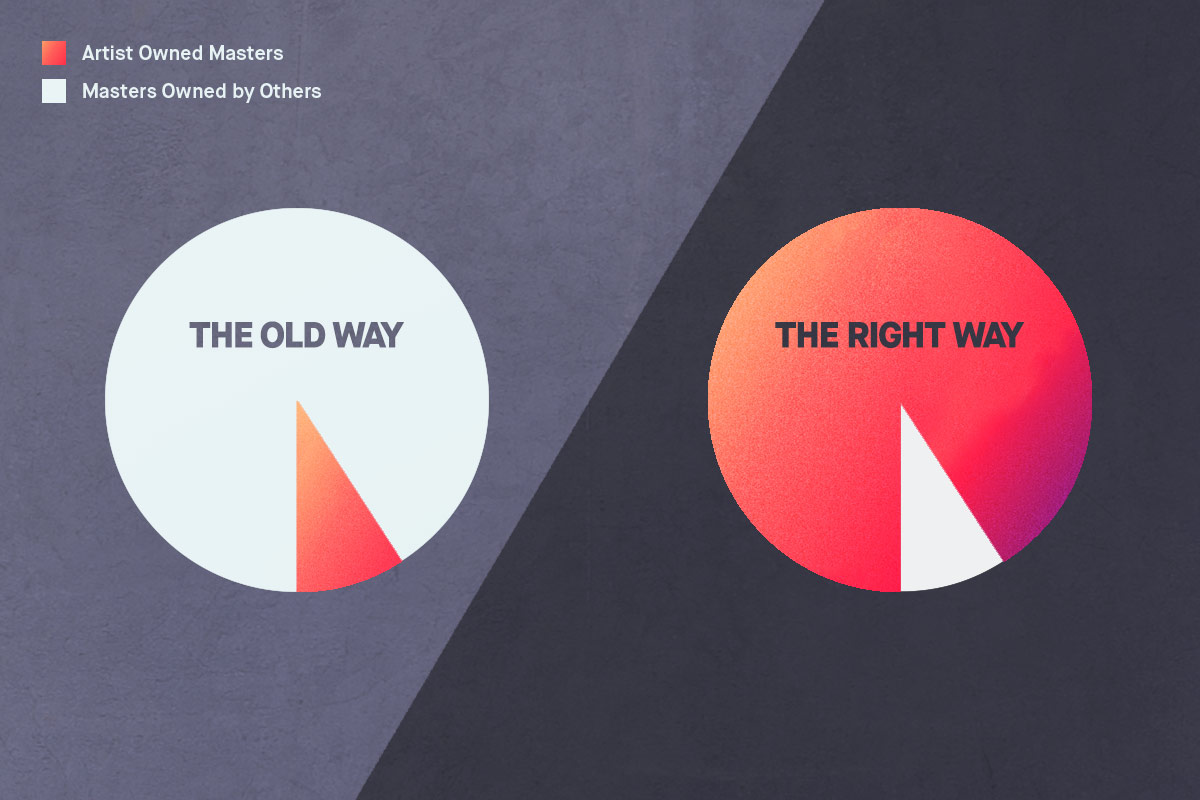 Why Owning Your Master Recordings Means Everything

For decades, labels have leveraged the allure of a full-time music career to ink deals that swipe copyrights from artists. Today, tides have changed. Whether financial stability is around the corner or old news, you don’t need to sacrifice creative control and ownership to make it. Hold tight to those masters and keep scrolling.

In many traditional record deals, an artist signs away their master rights — that is, the rights to their recordings — to a record label either for a set period of time or the length of the copyright. In return, the label provides the artist with an advance that’s recoupable against the artist’s royalties.

That may sound standard, even great to some, but in most of these traditional deals, the artist is prohibited from releasing any records elsewhere with another partner, label, or even artist in some cases. And any recordings made by the artist under the contract are owned by the label — possibly forever.

“That deal traditionally has not been that great for the artist,” explains Silvia Montello, Senior Vice President, Operations at AWAL, “because it means that, in return for the advance that they get, they’re having to sign their rights away, often for those particular albums or tracks under that contract in perpetuity.”

Sometimes, she explains, artists get the opportunity to buy their songs or catalogue back at a cost, but if they haven’t recouped their advance, the expense tends to reach prohibitive and unaffordable heights. London-based singer/songwriter Bruno Major experienced this first-hand before leaving his label and accumulating more than 130 million streams.

Bruno Major before opening for Sam Smith earlier this year.

“When you sign a contract, you are signing yourself into becoming a commodity. You’re becoming a product, and you should understand that. Everyone should understand that, at the end of the day, as much as they’ll tell you that they love you, and they’ll tell you that you’re the next greatest thing, ultimately, there’s an Excel spreadsheet somewhere with an incoming and an outgoing column, and if that is not balanced and in the green, ultimately, they’re not your friends.”

“By owning your master recordings, you keep creative control and you’re free to release your music however you want via whichever channels you choose,” says Paul Hitchman, President of AWAL.

And, he points out, if an artist does ever choose to sign to a label, owning your master recordings is like having an upper hand. “If an artist owns their own rights,” says Hitchman, “they are in the best position to negotiate with a record company and obtain the best possible terms and controls.”

Rising AWAL artist VERITE has been courted by numerous major labels, but the lack of control over her music and masters was glaring in every offer. “What guarantees does a major label contract afford you?” she says. “This idea that I’m gonna sign away my rights, my autonomy, my creative control, and my financial independence…isn’t really a sustainable living.”

VERITE at her Los Angles performance during her US tour earlier this year.

According to Hitchman, artists and their teams should look out for the following red flags in recording contracts:

“What’s really, really important for artists is that somebody that understands music company contracts — so a legal representative of some description — reads it with them and makes it really clear what’s being offered. If they’re being offered a big advance and a five-year term to cover a certain number of album recordings or track recordings, then they need to look at what happens at the end of the term of that contract. Do the rights revert to them or do they stay with the label? That’s probably one of the most important things to look into.”

The upside of ownership is lifetime copyright value, which typically towers over upfront advances. Successful creators then have the freedom and control to sell their rights down the line, if they so choose, for a maximized windfall. No matter what, it’s crucial to consider what you’ll gain—marketing strategy, tour support, promotion priority, etc.—versus what you’ll lose by giving up even a portion of your rights.

No matter your status, it’s worth exploring and evaluating all options. A safer alternative, Hitchman says, is licensing. “I would advise any artist to, if possible, license your recordings for a limited period rather than giving up your rights for the life of copyright.

“We [at AWAL] have seen many examples where artists have signed away their recording rights in exchange for an advance and have later regretted the decision because they would have made more money by retaining ownership and would still have owned their rights.”

Though immediate payouts tempt many, ownership offers real investment to  those committed to music for the long haul—from big stars to budding hopefuls.

For if and when you’re ready to sign a record deal, we tackle the weird words & strange phrases all rising teams should know about before signing the dotted line.