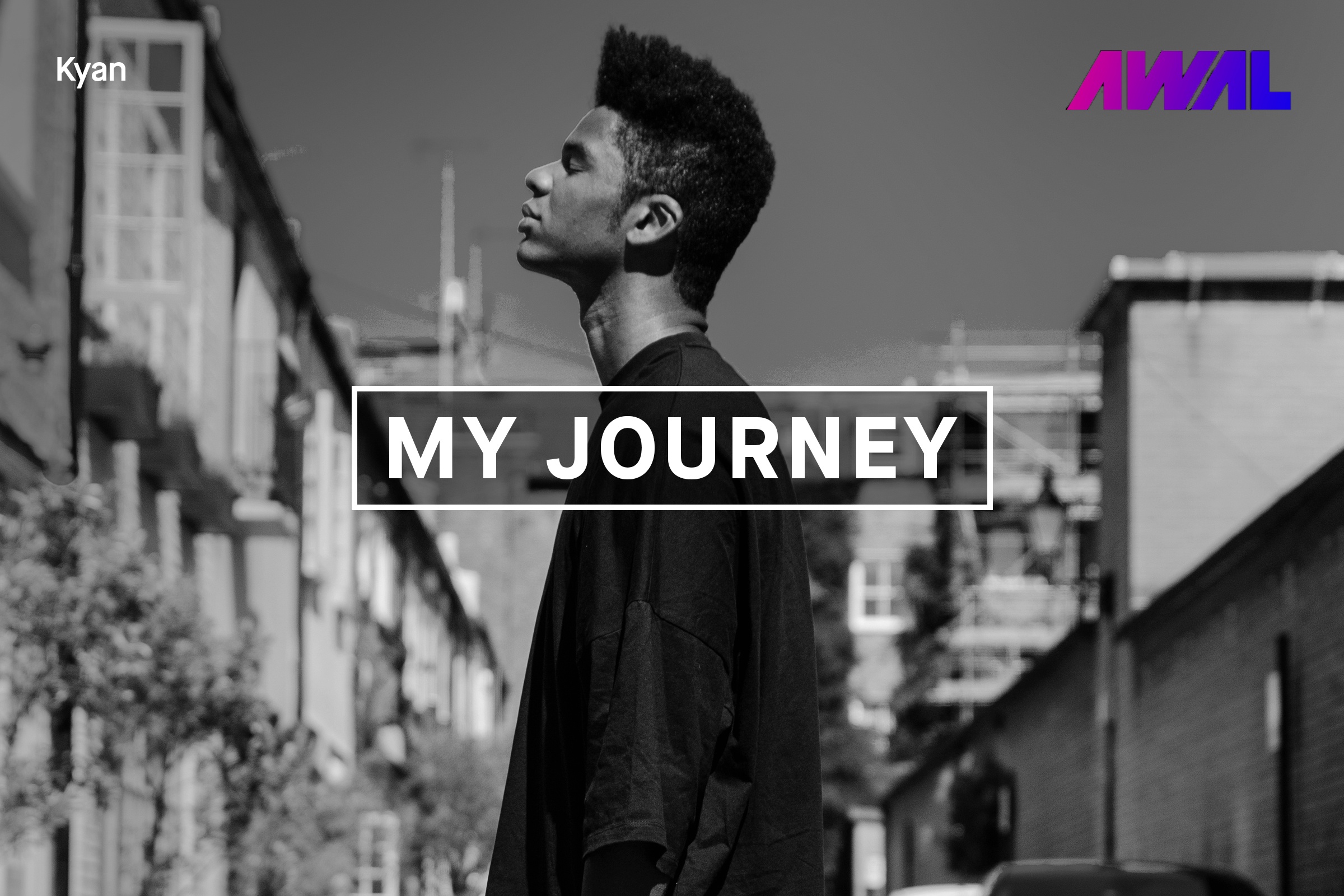 How Kyan Turned Industry Trauma Into Art Built to Last

One of England’s most soulful voices belongs to a singer who aims to be so much more. Kyan lets art lead strategy, and art has no bounds. A collapsed relationship and a failed label stint affirmed the value of self-sufficiency, so it’s only right that such a gifted performer writes, produces, edits, designs, directs—you get the idea.

The desire for greatness is contagious, a magnet that attracts ambition, fandom, support. Now, with millions of streams under his belt, a team of believers, and guidance from an all-time legend, things are looking up. We spoke with the creative wizard about what it took to stare down defeat and emerge on top, on the rise, in control.

Q: You seem to envision a brighter future on one of your earlier songs, “Insert Runaway,” with the line, “Love will be for everyone.” It’s an inclusive statement during a divisive time. Are you hoping to accomplish things with your art that’s bigger than yourself?

A: I think it’s our job as artists to create something that is bigger than ourselves. These are divisive times, but I believe art can change people’s lives and bring about real change on an individual and societal level. That’s a special responsibility, and I made a decision early on that I wanted whatever I created to be of real value. That’s what gets me excited.

Q: You overcame a handful of poorly timed obstacles—a relationship lost, a label deal cut short—and kept moving forward. Both sort of force you to lean on yourself more, to think and act more independently. Did that affect how you thought about your creativity and the business orbiting it? What did you learn in the aftermath?

A: Without those obstacles, I would not be where I am now, with an album I am hugely proud of. I have no regrets. What I’m learning is that nobody has all of the answers, you’ve got to constantly evolve and be adaptive.

Q: Three years separated Remote View from Like Summer, your first post-Virgin release. Have you had your new music ready in the vault or was the EP a recent undertaking? Where are you trying to grow most as a creator right now?

A: The songs on this album chronicle a two year journey from a personal abyss, and the climb that followed back to self acceptance. As such, the first song on the album ‘Nothing Beyond’ was written two years apart from the last song on the album “Like Summer’.

The album wasn’t even written to be an album, in that I didn’t set out to use my experience to create a product. It was just the only way I could cope with my emotions at that time, it was cathartic. It wasn’t really until a lot later on that I thought maybe that those personal songs would be worth sharing with other people and the album took shape.

I think the most difficult thing to do as a creator is to let go. That little voice in the back of your head that tells you what you’re creating isn’t worth finishing, or asks you who it’s going to appeal to, I consider that voice the enemy of creativity. True inspiration occurs almost in a meditative state; you’re aware of what you’re doing but you’re just channeling that inspiration, rather than trying to interfere with it. It’s easy to do that when you’re doing it for yourself, but as soon as you achieve any type of success that voice creeps back as you want it to continue. So I’m mindful of that.

Q: “Like Summer” sounds like coming up for air. You’ve alluded to bouts of depression in the past and this sounds like an awakening—what led you to that place and what led you out? Do you think you experienced anything other creators can learn from?

A: A long term relationship and a major label deal both came to an end within the same 24 hour period. I lost all that meant anything to me and all that gave me identity. Signing a major record deal was something I’d aimed for my entire life, and although I had always believed in myself, having the seal of approval and backing of the biggest label in the world was no small thing.

I’ve never been the type to give up and I’d had my fair share of knock-backs by this point, but this felt different, it felt like it was too big to come back from. I knew how I’d be perceived, as an artist who had their shot, didn’t make it and wasn’t worth investing in anymore.

I didn’t know how to exist in a world where I couldn’t do the thing I loved most to the level I wanted to, and that drove me down into the darkest of holes. Coupled with the relationship ending, it was the ultimate rejection from both sides.

Music led me out.

For the first time in so long I was able to write honestly. All I could write about was how I felt in a very raw and literal way. With each song I explored a different piece of that darkness, and through it was able to let it go.

Q: You recently won the honor of working with Nile Rodgers. What have you taken away from time spent with him?

A: It’s been incredible hanging out with Nile Rodgers. It’s one of those weird cases where you remember all of the moments in your life where his records have been a soundtrack, and then you have to reconcile that with the person who’s standing in front of you. He’s made some truly timeless records, he has his own uniquely identifiable sound and he’s a really lovely guy. It’s been inspiring to see all of that and to know it’s possible to do it all, to achieve that level of success, but still be true to yourself.  I’ve played him songs from the album and it was totally surreal to see and hear his reactions, it’s that extra bit of confirmation that I’m on the right path. I’m excited to see how our relationship develops over time.

Your art stands tall on its own, no context necessary. You also seem to be quite ambitious, and that goes beyond music (should we expect to see you starring in films in a few years?). How do you think you’ve evolved your understanding about the strategy that goes into each release? The importance of having a team around you?

A: Thank you, I appreciate that. I see ambition as an excitement to share what you’ve created with as many people as possible. It’s also about challenging yourself creatively in new ways and having fresh perspectives. For instance, I’ve just started a new music group called ‘Orijyn’, and I’ve been working with a playwright and a cartographer to create the dystopian world in which this group exists and creates. As well as being a functioning group, I see it being a novel, a musical, and a film. That’s what has got me excited at the moment, so we’ll see what comes next.

Releasing music independently definitely gives you a fresh perspective on the importance of a team and what goes into each release. I’m both a one man band and a constant collaborator in that although I wrote, played and produced every song, did all of the graphic design for all of my social media and film posters and co-directed and edited almost all of the videos, I’ve only been able to do that because I’ve had a team supporting me in all of that. My manager Sarah has been incredible and I owe her a hell of a lot. Every single person who pledged on my Kickstarter and allowed me to finish the album, PRS Momentum funding, AWAL, my radio plugger Mel, directors like Monica Gonzalez Carter (directed Like Summer) who have helped me realise my vision, everyone who comes to the shows, my band Jed, Rosie, Sabrina and Veiga…These people are my team and it really feels like we’re all in it together. Everybody is taking their time to be involved in something which isn’t making them as much money as they could be right now because they believe in the music. That feels special to me and I feel lucky to have all of them.

My main strategy is make something I believe in and then spread it as far and wide as I can using innovation and whatever tools or mediums are available.