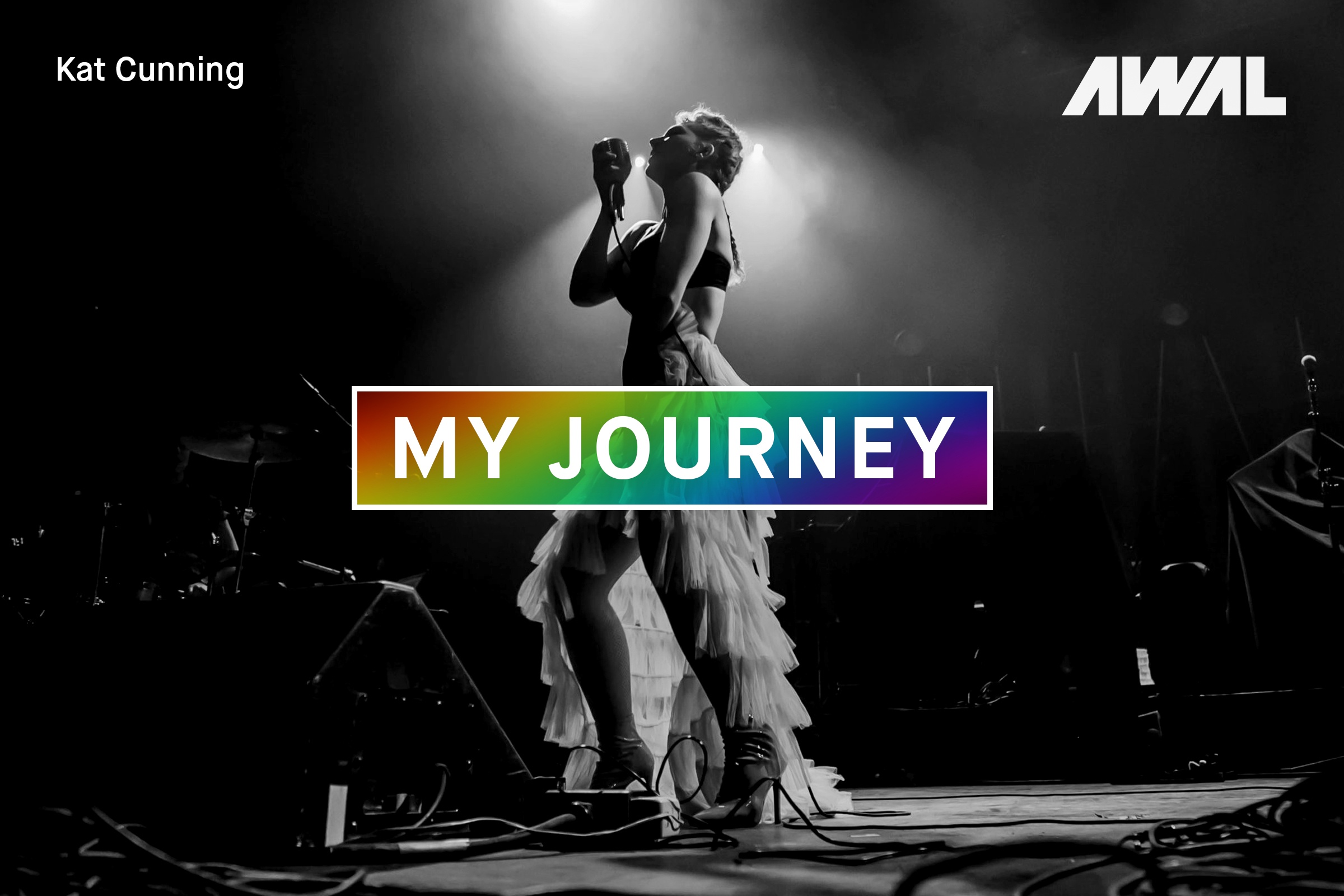 For many artists, how they identify themselves plays a large part in their music. These qualities aren’t labels, per se — they’re more puzzle pieces that create a life, a human, and a story. Today, more than ever, those artists who identify as LGBTQ+ are telling their own stories through their songs, videos, images, and more, empowered by a community that’s raising its voice louder and louder.

To celebrate PRIDE this month, we wanted to chat with one of our own artists whose work is influenced by her own experience as a member of the queer community — her “personal experience,” she says. Kat Cunning is both an artist and an actor who’s graced the Broadway stage, landed a recurring role in an HBO show, and performed her music to hundreds of people at festivals like Firefly and The Great Escape.

As she readies her new EP and heads out on the road later this year, we caught up with Kat to talk about her multi-faceted career, the inspiration behind her latest track, “Make U Say,” and why including queer themes in her music is important to her.

I grew up in ballet. I got my first dance job post college, and I noticed I wasn’t the best dancer. In an effort to keep the job, I told them I could sing. They gave me a song in the show, and The New York Times wrote a review asking for my album. I realized I loved it and decided to pursue music. That review helped to legitimize me to my first collaborators.

Within the last year alone, I’ve experienced so many exhilarating firsts. First release. First tour ever (opening for LP). First music video and doing my first interview about it. I had my first real fashion magazine photoshoot while I was in the UK to play the Great Escape, and that was a real landmark because I’ve been doing photoshoots and pretending to be in W magazine since I can remember. It’s just the start but I feel like I’ve already checked a lot of dreams off my list.

Tell us a little bit about your time on Broadway. Was it a stepping stone for you?

Theater definitely still has a place in my heart, and my time there isn’t up, but it’s such an intense time commitment and creating my own work is my priority now. I see myself continuing to build as an artist so that when I do a show, it’s one that’s built for my voice or my character.

I was very lucky to secure two roles in one year that were collaborative and featured my voice for what it is. That’s not always the case on 42nd Street, but I think it’s really effective when casting takes risks. I plan to write a musical down the line to contribute to the ones breaking rules.

You still act — recently, you’ve landed a part on a big HBO show. How do you balance your passions for music and acting?

I still act and dance. They’re pencils I keep sharpening because my vision of my career as an artist involves them all. Gaga’s vampiric role in American Horror Story recently was a great example of how you can be everywhere at once and how what she has created as a musician informed what she is considered for as an actor.

You’ve spoken before about incorporating queer themes into your music. Why is that important to you?

I feel a responsibility to say something as an artist, and I believe in the personal as political. I am queer. Telling true stories about my experiences that involve my queerness is my most natural contribution to fighting for this community. Representation matters. For all kinds of people who are marginalized.

Have LGBTQ issues and themes influenced your songwriting?

Yes, but I try to keep it personal. I try not to preach but to tell stories people will empathize with.

And you recently covered Lil Wayne/Drake’s “I Wish I Could Fuck Every Girl in the World” at your New York show — why did you choose this song?

When I was in college, Drake played our out-outdoor festival “culture shock,” and I had just recently come out. I went buck-wild in the audience soaked in my new-found swag.

I relive that feeling of unabashed joy and freedom when I perform it. It’s an accidental pride anthem because I really do wish I could fuck every girl in the world, and I’m not ashamed to say it.

Have you seen any Pride performances that really stood out to you? If so, what made them stand out? Are you planning on performing?

I’ll be joining the House of Yes Float and going to a lot of events. I’m writing for my EP right now, and it’s very inspiring to be deep in #pridemonth.

Do you think the industry is opening up more to incorporating LGBTQ artists and influenced songs into mainstream music?

Yes! I think queerness is being commercialized, which is weird to see but a good sign. Music is participating in that. When it comes to consumers of art with queer themes, I think queer people have been craving the representation and cis people are catching on that it doesn’t make a difference to good work. You love us already. We make you good music and clothes and art, and we come rainbow clad. What’s not to love?

What’s the story behind your latest track (and the video for), “Make U Say”?

“Make U Say” is sort of a love letter in the verses and a command in the chorus. It’s about taking power and being acknowledged in both a fun, sexy way and a political way.

The video is mostly just a live video of one of my more intimate performances at an art club in the city, but I wanted to add visual elements from the show as an overlay to give it some vibe.

You also recorded and released an acoustic version. Why was it important to reimagine the track in different ways?

I loved stripping it back. It’s already a pretty personal song, but I thought it would be a good one to capture on acoustic since the message is so personal.

You recently performed at Firefly. What were the best parts and the challenges of that show?

I got dressed in a very smelly portable bathroom (rock and roll), but the best part was seeing so many people gravitate to our stage and even come to see us the following night. We played at the same time as Lizzo (WHO IS FIERCE), so it meant a lot to have such a crowd.

What’s coming up next for you?

I have a new release coming up next month, and it’s really gonna be a contrast to what I’ve released so far. I also have a recurring role in an HBO show, and we’ll wrap up filming for that soon. I’m also finishing writing/recording for my upcoming EP and touring at the end of summer and fall.

What is your ultimate dream as an artist?

Awesome. You need a team that puts their heart into supporting you, and AWAL crushes that.