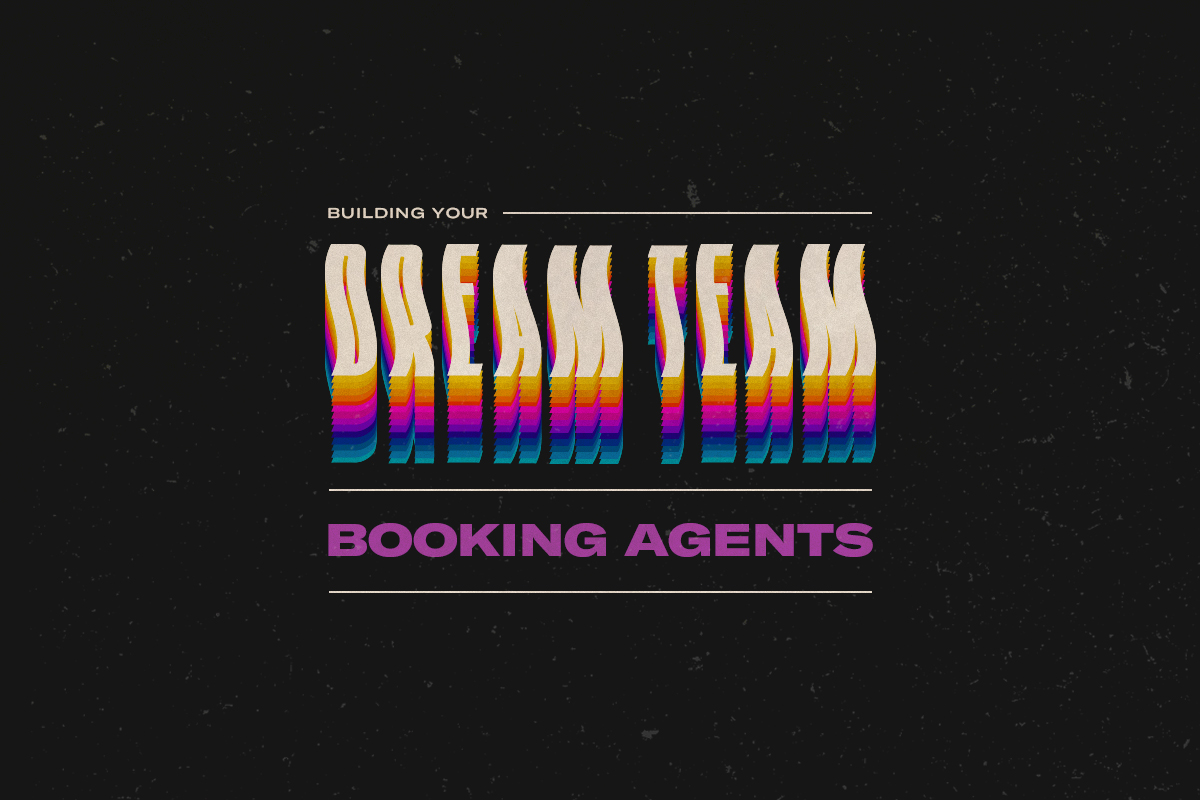 Few achievements validate (or accelerate) an artist’s impact more than a packed room—from 100-cap basement shows to a headlining bid at Glastonbury. Behind the scenes, booking agents are hard at work, tracking the numbers, scoring new opportunities and mapping out the long game. Let’s dig in.

Few achievements validate (or accelerate) an artist’s impact more than a packed room—from 100-cap basement shows to a headlining bid at Glastonbury. Behind the scenes, booking agents are hard at work, tracking the numbers, scoring new opportunities and mapping out the long game. Let’s dig in.

A quality booking agent exhibits most, if not all, of these traits:

1. A thorough knowledge of booking contracts, options, and bonuses with the experience and expertise to help you squeeze out every dollar

2. An understanding of the marketplace to know what guarantees are appropriate for the level you are as an artist

3. The foresight to see what tours are currently in the market and on the horizon, and leverage that for support slots for a beginning band

4. The relationships with managers and other agencies to make said support slots happen NO MATTER what agency is putting the tour together. A common misconception is, “I can only get on that tour if I go with ___ agency”

5. A smart understanding of routing and the ability to string together multiple dates to make the financials work in your favor. Playing “one and back” dates or single fly dates is never going to be as financially viable. Once you mobilize your touring apparatus for a show (band, crew, TM) then keep them on the road for a bit to maximize your earnings.

Agents’ reputations precede them. Ari Gold, of Entourage fame, both reflected and strengthened a cultural stereotype: Many agents, across entertainment, are outspoken and aggressive by nature, if not necessity. That said, plenty of agents are kind-hearted and deeply loyal people. They’re also hard workers. The notorious mailrooms at major agencies (e.g. WME, UTA, ICM, CAA, and APA) tend to vet out the faint of heart.

NOTE: The same person cannot legally serve as an artist’s manager and booking agent in California and New York. Some big management companies, however, sometimes have a tour manager on staff who performs the role of an agent without collecting commission.

2W: What a Booking Agent Does

Quite a bit. Responsibilities start with the title. Agents book, route, and coordinate one-off gigs, college dates, festivals, tours, and, for some, an artist’s or band’s personal appearances at after parties, clubs, billionaire yacht gatherings, etc.

There’s lots of outreach to folks who organize and buy shows — calling promoters, texting promoters, emailing promoters, you get the idea. They know hundreds of venues like the back of their hand and add a masterful understanding of negotiation, local promotion, and what it takes to nurture and scale an artist’s earnings onstage.

The best booking agents recognize that the show circuit isn’t a free-for-all money grab, instead treating live like a delicate balancing act of supply and demand; for instance, knowing when it makes sense to skip Los Angeles on one tour with the goal of selling out a larger venue next time, starving a market now to maximize hype later.

While it’s common for an artist to sign, or commit, to one agency, that agreement is much looser than a record label or publishing agreement, and copyright ownership is almost never involved. The lack of a locked-in deal structure often incentivizes agents to take an A&R-inspired approach across genres. It can pay dividends to find talent first.

NOTE: Agents rarely receive above 15 percent on any booking they make with a promoter. The general standard hovers between five and 10 percent. If a show or tour is paid in advance, the agent collects the money, takes his or her cut, then pays the artist team. We’ve excerpted the following from an actual showcase contract.

Call it a catch-22. Live shows, done right, snowball your following, yet evidence of an active following leads to live show opportunities. This is where a booking agent (live), a release partner (recordings), and a manager (everything related to you) work together to nurture your trajectory. Great music forms fans. Momentum fosters industry support. When both collide, careers accelerate.

Once you have hundreds of fans regularly showing up to see you perform, or when your releases reliably get 10s of 1000s of streams (and then some), you’ll likely have enough of a track record under your belt to approach agents, if agents aren’t already reaching out to you. Accomplished agents rarely join forces with unmanaged artists because there’s more uncertainty, so recruiting a dedicated core team (manager, photographer, producer, engineer) comes first for most.

4W: Where to Find a Booking Agent

A booking agent will tend to meet artists through trusted sources — management companies, industry allies, cousins with great taste, etc. Plenty of agent-artist relationships kick off well before any sort of signing with a larger release partner, though agents rarely respond to an unsolicited show invite. 1,000 cold emails might land a half-dozen responses, but shortcuts (and shots in the dark) don’t equal a winning strategy. (That said, you can identify many agents by digging through the “following” lists of big agencies on Twitter and IG. Asking if you can treat someone to coffee tends to do more damage than a song link.)

Newcomers can make inroads by trying to meet the promoters behind their city’s venues, or working with others in the area to string together enough small dates for a local tour. The pursuit of national exposure calls for more established agents with clients relevant to you.

FINNEAS performing with Billie Eilish at House of Blues Boston.

5W: Why a Booking Agent Matters

A great booking agent can orchestrate the strategy that puts you in front of thousands, if not hundreds of thousands, of new fans. In short, work with someone who (A) believes in you and (B) has enough experience and leverage to move the needle. Agents often act as salespeople on your behalf. They have to pick up the phone and tell a promoter why it’s the perfect time to slot you on their festival, or why it’d be a missed opportunity if you didn’t open for a bigger artist who’s performing in your home city.

Ultimately, it’s a lot easier for agents to do this well when they love what you do. Sometimes, working with a high-powered agent only matters if you’re a priority. You might have a better shot getting great placements if the new kids on the agency lot believe. Either way, it’s crucial to remember that an agent isn’t the golden ticket. Plenty of tour opportunities actually happen through artist friendships or management connections. It’s ultimately on you to motivate your booking agent, practice your craft, and stay accountable.