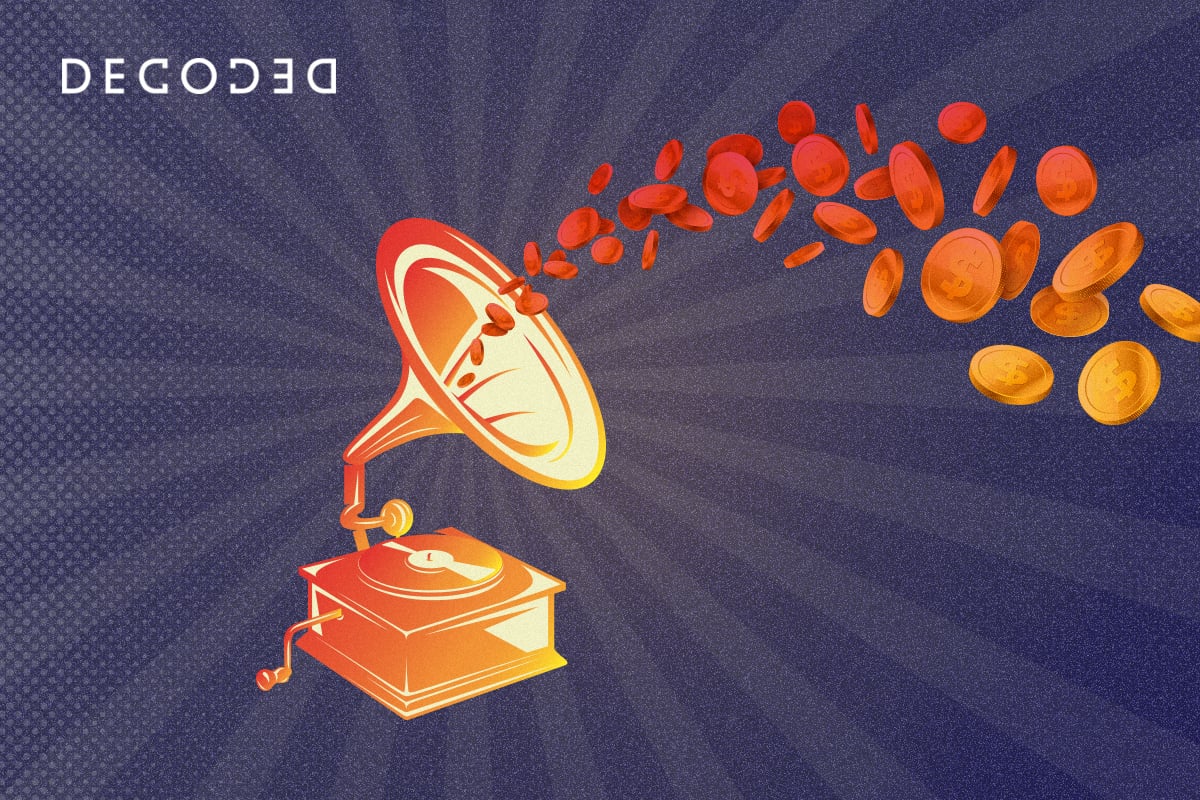 Decoded: The History of Record Deals

Artists have always shaped music’s future, and tech has always shaped how they do it. When you retrace our industry’s steps, macro changes — the way songs are made, heard, valued, and ultimately exploited — start with patented inventions, clever innovations, and vertical integrations that shift creative norms & consumer behavior.

Edison paved the way with the phonograph in 1877. Ever since, new technology has recalibrated the status quo. “Vinyl” wasn’t a thing until vinylite plastic replaced brittle shellac. An album held little cultural or commercial value until the 12-inch came along. Singles drove the business until they didn’t until they did again. Each new step changed the music industry, and, subsequently, how it worked for artists.

While record deals have been around since the early days, their structure, standards, and consequences have evolved. Throughout the past 100-plus years, however, one constant has held firm: The minds behind the music almost always walk away with less than the powers that be. Hop in the time machine and explore how we got here.

It’s 1850, the sheet music era. Music fans have two options: Play music themselves or hear someone else play it live. Despite some governments (shoutout UK Parliament!) granting musicians ownership of their work, today’s licenses (e.g. mechanicals) are not formally protected. Marching bands are huge, though.

When Edison snapped and unveiled the phonograph in 1877, enabling playback and acoustic recording, he laid the initial bricks for modern music’s evolution. Records supported 2-3 minutes of audio, electronic microphones weren’t real, and performers, not yet artists by today’s conventions, received small flat fees with no royalties. Musicians belonged to unions. The biggest writers were lucky to get 15% of sheet music sales. Not quite dream job material just yet.

Shockingly enough, many believed that records, aka “at-home listening,” threatened to destroy music. If you could sit back and listen to the greats whenever, why bother with practice!? (Speaking of practice, we are now morally obligated to link to this.) Illogical fears continued to rear their heads as radio graduated from the first-ever music broadcast in 1904 to a global standard in mass communication.

Early 1900s: The Advent of the Record Label

In 1904, one of the earliest record deals ever recorded, pun intended, came courtesy of Victor Talking-Machine Company, which produced, among other things, record players. The deal gave one artist $4000 per song, plus 40 cents (or 26% to 40%) per sale, and resulted in the States’ first platinum seller, a 78rpm opera piece. Not too shabby.

U.S. Congress passed the Copyright Act of 1909 soon after, creating the compulsory mechanical license to ensure publishers and writers (not performers) took home a small piece of every record sold. At this point, country music was “hillbilly,” and any song made by a person of color endured the unfitting categorization of “race music.” We know.

During this stretch, A&R scouts, or “hunters,” spent lots of time combing the south as ancestral culture vultures, buying songs from rural musicians, usually folks of color, for $25 to $50. Meanwhile, in 1919, Victor struck a rare performer-friendly deal with star singer Enrico Caruso, guaranteeing him $100K a year for 10 years, plus royalties, compared to a typical performer salary of $15K and no royalties.

Enrico Caruso put #s on the boards in a big way back in the day.

Call it a topsy-turvy era. U.S. record sales dropped from 125M (1926) to 6M (1932) before rebounding to pass 375M (1947) after the Allies won World War II. Radio’s Golden Age reigned: Broadcast systems reached 100s of millions globally, and BBC regularly devoted more than 43% of programming to music, which laid the foundation for newfound scale.

Most pro musicians still belonged to unions and were work-for-hire. Standard deals at this point typically granted artists 3 – 5% rates on 90% of sales, with stars like Frank Sinatra hitting 6%. However lopsided, the splits had some logic to them: Recording, manufacturing, distributing, and marketing music all proved quite costly. Companies had to commit to sales projections upfront, stomaching the losses of underperforming releases. Every project came with real financial risk on the national and international playing field, which made great A&Rs prestigious for decades to come and justified inequitable norms.

With some help from UK rock & roll, the album format exploded in the 60s. Margins grew, and music entered a new era of long-form expression. Back then, royalties usually spanned 5 – 12% in the States and 8 – 15% in the UK, with advances ranging from $5,000 to $15,000 for new bands, plus three-year, six-album terms with 1 album commitment from the label (call ’em 1+5s) with 25% of the artist’s publishing income locked down. TV had recently become another mode of mass marketing — 60 million watched Elvis Presley perform on the Ed Sullivan Show in 1956 — and helped mint long-lasting icons

Elvis during his debut performance on the Ed Sullivan Show (1956).

By the 1970s, music started maturing, legendary indies set up shop in the UK, and radio continued to help labels print money. The typical artist royalty didn’t budge much, sticking between 5 and 15%, but upfront advances expanded, with a top-end of $150,000 for rising bands. One early hip-hop deal exchanged $10,000, recoupable, for a single and 50% of the publishing rights, while a superstar folk artist signed a 5-year, 10-album deal with $425,000 per project advanced, and A similar act received a $1M guarantee per album, plus a $2.5M advance. As these upfront payments swelled, contractual periods lengthened and few acts ended up in the black.

In the 80s, advances spiked again, music catalogues became cash cows, MTV took over television, and Sony and Phillips, both owners of record labels, co-created the CD. Many performers lost money they should have received because hidden contract clauses reduced their royalties by 20% on new tech, CDs included.

84 albums sold +5M copies during this time, and 19 sold +10M. Average royalty rates hovered around 10%, indie hip-hop acts ended up with advances between $10K and $100K, megastars negotiated for multi-million advance guarantees against royalty rates of 35-plus percent, and post-prime acts hit the seven-digit advance threshold. Excess was everywhere.

In the 90s, massive JV and P&D deals flooded music before college kids crashed the party with Napster. Royalty rates usually ranged from 10 – 12% of wholesale CD prices. Incumbent labels took bigger bets on hip-hop, handing out $500K to $4M advances on the genre’s major acts, plus, in one case, a $40M advance for a 50/50 JV with a NYC hip-hop indie.

For the entirety of this 30-year stretch, vinyl, cassettes, and CDs all supported the same business logic: Unbalanced record deals reflected the extreme risks undertaken by a music company to discover, develop, distribute, and market artists in a physical world.

When peer-to-peer file sharing took off, the record industry lost the keys to its kingdom. Napster shocked the world, and iTunes subtly did the same: Instead of labels selling CDs for $10 to $22, listeners were either downloading records for free, or previewing songs and cherry-picking their favorites for 99 cents. With margins shredded, labels had to think up different ways to cover losses. Enter one of music’s more notorious deal structures.

Alongside falling gear costs and DAW software, iTunes’ launch helped jumpstart digital distribution’s emerging role as an affordable, accessible gateway for artists. Around the same time, Kobalt opened its doors, using new technologies to pay music makers fairly. [They’ve done right by that goal so far, but Kobalt does own us, so don’t just take our word for it. Exhibit B. Exhibit C.]

As the landscape evolved, different deals and release strategies rolled out. In 2013 alone, Beyonce debuted her surprise album as an iTunes mini-movie, Jay Z sold 1M copies of his project via a Samsung Galaxy pre-release, Lady Gaga sold her record for 99 cents, Radiohead’s Thom Yorke released music via BitTorrent, and Chance The Rapper launched himself with a free mixtape. That said, physicals still contributed to half of global music revenue, and artists big and small lamented emerging listening platforms.

Music’s digitalization catalyzed in 2008 when a Swedish startup set its sights west. Millions of early Spotify adopters accessed songs subsidized by ads or subscriptions, but the true impact of streaming took years to show itself. Industry revenues pulled a 180 in 2015, steadily rising every year since, which eclipsed a chunk of the 17-year sales slide that started in the late ‘90s. Hip-hop, traditionally underrepresented in chart metrics, earned its long overdue genre crown once streaming captured a majority of the listening activity coming from free mixtapes. Across the board, artists suddenly had more freedom to form their own teams or creative collectives, distribute music, and measure the impact with clear reporting.

A new breed of labels have emerged as a result, acquiring rights or licenses to songs and leveraging the current low price of distribution to release them on streaming platforms around the world. These deals tend to resemble 50/50 net profit splits for multi-song or one-project commitments with low four- or five-figure marketing budgets and five-year licensing windows. Meanwhile, AWAL [disclaimer: that’s us] has created no-catch partnership agreements that grant artists full master ownership, short licensing periods, and the lion’s share of every sale or stream, whether the marketing budget is $10K or $1M.

Reconciling the History of Record Deals With the Future of Music

Curiously, for some traditional companies, age-old artist royalty rates in the mid-teens — originally designed to account for physical shipping and manufacturing — still persist, despite early deal clauses that first treated streaming income like licensing income, split 50/50. In the mid 2000s, when it came time for some artists to renegotiate their deals, contract amendments often contained a clause that switched the 50/50 split to reflect a ‘normal’ rate, despite the negligible or nonexistent costs of shipping and manufacturing songs to streaming platforms. Many indie labels did the opposite in 2014, pledging to treat these new revenue streams as they are, not based on what once was.

To this day, despite fundamental shifts in how music is made, distributed, marketed, and consumed, the standard deal structure from traditional music companies looks a lot like it did when vinyl ruled the world: Lots of options (the company’s right to retain or drop follow-up projects, often 2 – 4 for new artists), not a lot of commitment (few guaranteed releases), unbalanced royalties (usually 85/15 in the company’s favor) against an advance (anywhere from $50K to $250M, paid back with the artist’s future earnings), and master ownership for the label — stripping creators of their IP and long-term cash flows. Ancillary revenue clauses (re: 360 language) persist as boilerplate inclusion in negotiations with most companies.

While still far from standard at the highest level of industry, exceptions are starting to materialize, with 50/50 splits, master reversion (copyrights returning to the artist after 10+ years), fewer options (2 or 3), and more loosely defined product commitments (owing 14 songs in a term, versus a 14-song album). Unfortunately, these developments only apply to a small minority of record agreements. Companies like AWAL [disclaimer, us again] are helping push this sort of progress forward by introducing deals that recognize the true power source in this industry — artists themselves — by embracing new business models and technologies.