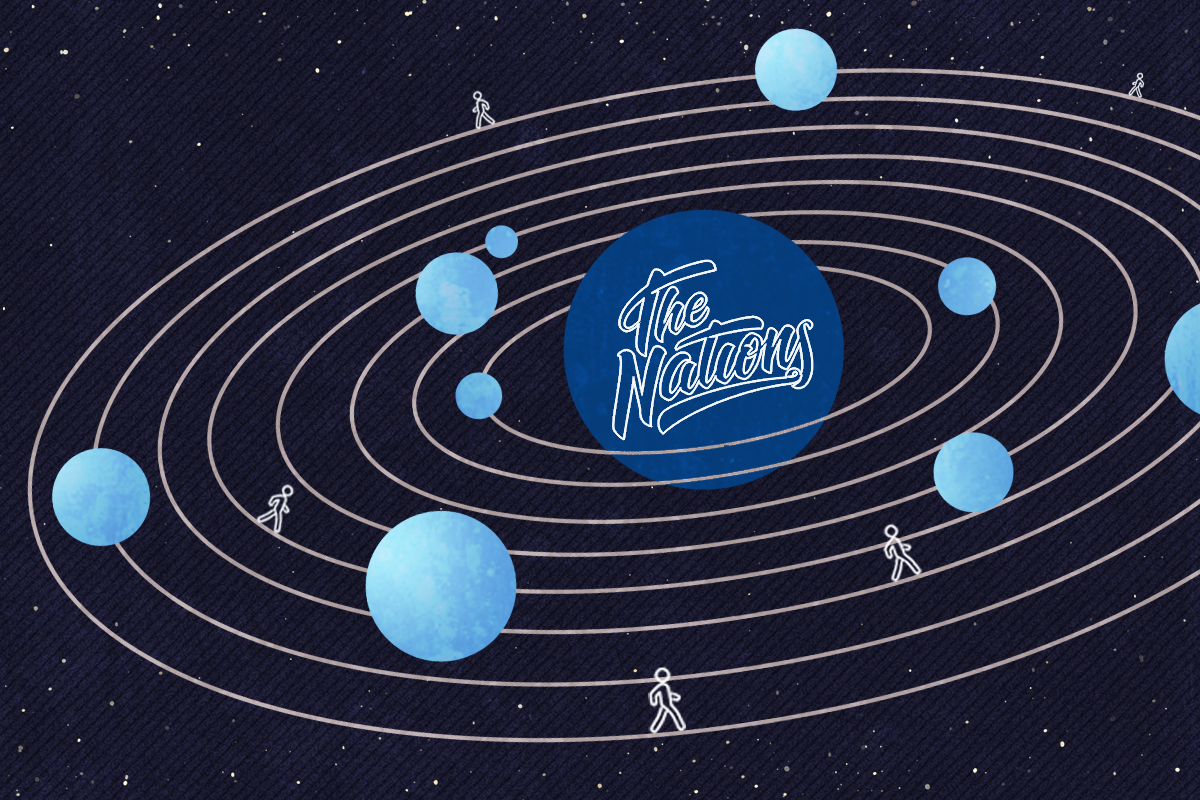 Translation? Spend more time in your fans’ shoes than you do worrying about the almighty gatekeeper. You know the one: that Rolex-rocking skinny jeaner who waits to show a new artist love until 27 of their verified friends do. In conversation with some of the minds behind The Nations — an internet behemoth with enough total followers (53 million) to match the populations of 200 different countries — the same fan-first concept arises again and again. Industry eats the dust of audience behavior 95 percent of the time. Why chase the former?

Some context for your cortex: The Nations, aka the 2012 brain child of then-teenaged Andre Benz, is best known for its YouTube family of music channels, which religiously curate a steady flow of remixes and original works. All things electronic led the way. Other genres followed: After Trap Nation came Rap Nation, R&B Nation, Chill Nation, Indie Nation, etc. More eyeballs brought more reach and money to invest with. Inspired by Netflix, the company moved into rights management, initially signing producers to one-off single deals. Lowly Palace, The Nations’ independent label distributed by AWAL, set up shop in 2016 and hasn’t stopped trailblazing since. Zoom in another layer and you’ll find Lowly artist Arrested Youth, a Kentucky export with diehard fans of his observant alt-rock. Across the collective, loyalty’s alive and well.

It’s easy to look at a success story and think top-down, to say Superstar X made it because her manager has unlimited cash to spend, or Label Y crushed the campaign just because they got lucky with a timely film synch. However important those variables are, they only scratch the surface. Big wins don’t typically happen without healthy habits: clever cash flow management, unignorable email subject lines, team brainstorms to identify left-of-center partnerships, exercise on the road to avoid burnout. In this story, it all funnels back to two-sided conversation.

What The Nations Family Achieved

How The Nations Family Did It

(Plus lots of A+ music, organized the way their fans expect to find it.)

The Art of Conversation

Whether strategic or instinctual, The Nations sidestepped the faceless aggregator path early, when founder Andre Benz started diving into the comments sections of his YouTube posts.

“From day one, regular Trap Nation viewers became invested in him,” Nations president Creighton Burke tells us. “There was a person behind it all and he took — takes — a lot of pride in it. It felt like supporting an artist who supported back: Get behind me and I’ll get behind you. He personalized it so much.”

“There’s no difference between what Andre built with The Nations and what we’re doing with Arrested Youth,” adds David Carlson, AY’s manager. “Andre would comment on all the posts. He’d react. He’d get involved. At the end of the day whatever you’re passionate about is just going to bring together more people who care about the same stuff. Why would you not want to talk with them?”

The things we do for some quality banter. As the good times rolled in the comments, The Nations team doubled down, occasionally opening up channels to fan curation and leveraging every audience engagement tool at their disposal. Polls — a basic function still underused by most artist teams — helped correct course as recent as this past October.

“We were planning this giant rebrand,” says Nations A&R Kerick Stevens. “New logos, new visuals, everything. Long short, there was a bit of an uproar from the community and we were voted back to the old logos with minor updates. We listened to them and implemented what they wanted. We applied it to every playlist across every channel. You can’t really track with data what listening does for a brand. It’s why a kid who’s a fan of Trap Nation or Lowly Palace will tell 20 friends what’s up.”

If you peak at the YouTube community sections of The Nations’ channels, you’ll discover polls asking fans about their favorite uploads, if not debates over the best remixes. When a new mix gets surfaced by a fan and the Nations team loves what they hear, they’ll often post it and credit the fan who passed it along.

The conversation doesn’t stop where the public forums end. Far from it. After speaking with numerous Nations supporters, the team learned firsthand about their backchannel impact. From Messages threads to WhatsApp group chats, kids around the world were sending uploads to each other.

The team has bottled some of that energy on Discord, a digital treehouse popularized by online gamers. The Nations’ watering hole has more than 12,000 members, with 1000 online at any given time. It’s a sizable lot — and just a sliver of their super fans globally. That said, the ratio does deserve a shout: 53 million followers to 12,000 Discord members is a wide gap. At their heightened level of interest, though, it’s still worth the extra effort to cultivate and nurture such a tight circle. The earlier a team puts community building at the top of their priority list, the sunnier things should turn out.

“The best way to lead a pack of fans, in my opinion, is to let a fan lead, whether it’s moderating the group of asking for feedback,” Kerick says. “Even if it’s negative, I’d rather have a fan working with us to filter and translate, or else it’s too much happening to get a clear read. You have 200 kids at any given team saying very negative and very positive things. You need help deciphering.”

“The curator on Trap Nation right now was a fan that just started working closer with us,” Creighton says. “We have a tendency to bring some of those people closer, especially if they’re intelligent, they have good musical taste, their feedback has been constructive, whether negative or positive, to Kerick’s point.”

“Two of the kids ended up really helping out,” adds Kerick. “One of them does creative for us, for Lowly. Then there’s Phineas who does lots of web development stuff. Four years ago, we had an old Nations site and he came in and just teared it apart. ‘You guys are susceptible! Fix this! Fix that!’ Eventually he built the new one and started moderating all of the Discord chats.”

The Fulfilling Business of Arrested Youth

Manager David Carlson and emerging artist Arrested Youth, with millions of streams under their belt, applied the same methodology to the artist’s own channels. AY has just shy of 11,000 IG followers (and roughly 20% post engagement), with another channel, @aymeetups, sitting at about 400 (roughly 25% post engagement) as of this writing. The latter account, however small at first glance, houses super fans concentrated in key markets across the States and beyond. Most AY tour stops inevitably lead to one of those followers organizing an AY Meetup in their city — past gatherings include bowling, dodge ball, and pizza parties.

“On our first tour,” David remembers, “AY opened for YUNGBLUD, and the fan pages started popping up: Arrested Youth Germany, Arrested Youth Croatia. There was one fan page I found that was run by a girl who was all over it. I called her and asked if she wanted to be in charge of something a little more organized and she did. We think our fans are smart and we trust them, so we’ve had fans design merch before, we’ve hired fans to photograph concerts, we’ll source art from them and pay them when we put it on a t-shirt.”

For once, every like on a photo not only equates to a ticket sale and a merch purchase, but also to an official street team advocate. Each is invaluable, especially in a world where many among us only engage with something we scroll past if a number of others already have. Ever get second doubts about eating in an empty restaurant?

One-to-one conversations aren’t for everyone. Some fans want to stream a song 20 times a month, but only on the treadmill. They might not even remember the artist’s name a couple weeks after they’ve moved on to the next gym song. Others want to contribute, feel close.

“We learned that Arrested Youth putting the merch in the bags and shipping it out himself had a massive impact on sales,” David remembers. “We sold out of almost everything the first night. Actually communicating that in the caption, sharing a photo of the boxing process, it made a difference.”

There’s a balancing act to monetization, though, which can become exploitative quickly. AY’s team tries to limit the amount of selling to a sustainable minimum. When they do restock the online shop, everyone who buys in comes out with a FaceTime call from one of their favorite artists. After a recent sale, AY spent 10 hours phoning fans.

It’s In The Programming

To leap from YouTube to other platforms and stick the landing, The Nations’ team needed to make some simple but critical adjustments. (Trap Nation’s eponymous flagship playlist on Spotify has more than two million followers, making it among the most powerful third-party playlists on the platform. Trap Nation’s IG following is 566,000 strong.) Those same adjustments apply to artists big and small.

“On Spotify, for the Nations’ channels, we update weekly,” Kerick tells us. “We do that for the purpose of, first of all, the aesthetic of it. You can actually see the exact date a playlist has been updated on there, which signals to people whether it’s vibrant or not. If you’re not keeping it up, people won’t go back to it or might bounce after stumbling upon it.”

You can leverage the same comms channels we discussed above to test the quality of a given playlist via chats and polls. Live sets offer a similar opportunity, for electronic DJs and hip-hop acts in particular: Their spotlighted artist playlist might reflect the music sequence of the show, with audience reaction on the road informing how the digital playlist evolves for listeners at home. YouTube is a different beast. Kerick explains:

“There’s lots and lots of uploads on the different Nations channels, as you can imagine. But a big group of kids, some of our core fans, they go back to some of the oldies — people who have been listening to the channel for five, six, even seven years. We try to curate YouTube differently to reflect those long-time supporters and make classics easily accessible, stuff from San Halo, the Dr. Dre remix, etc. Spotify is constantly new music. YouTube has more room for memory lane.”