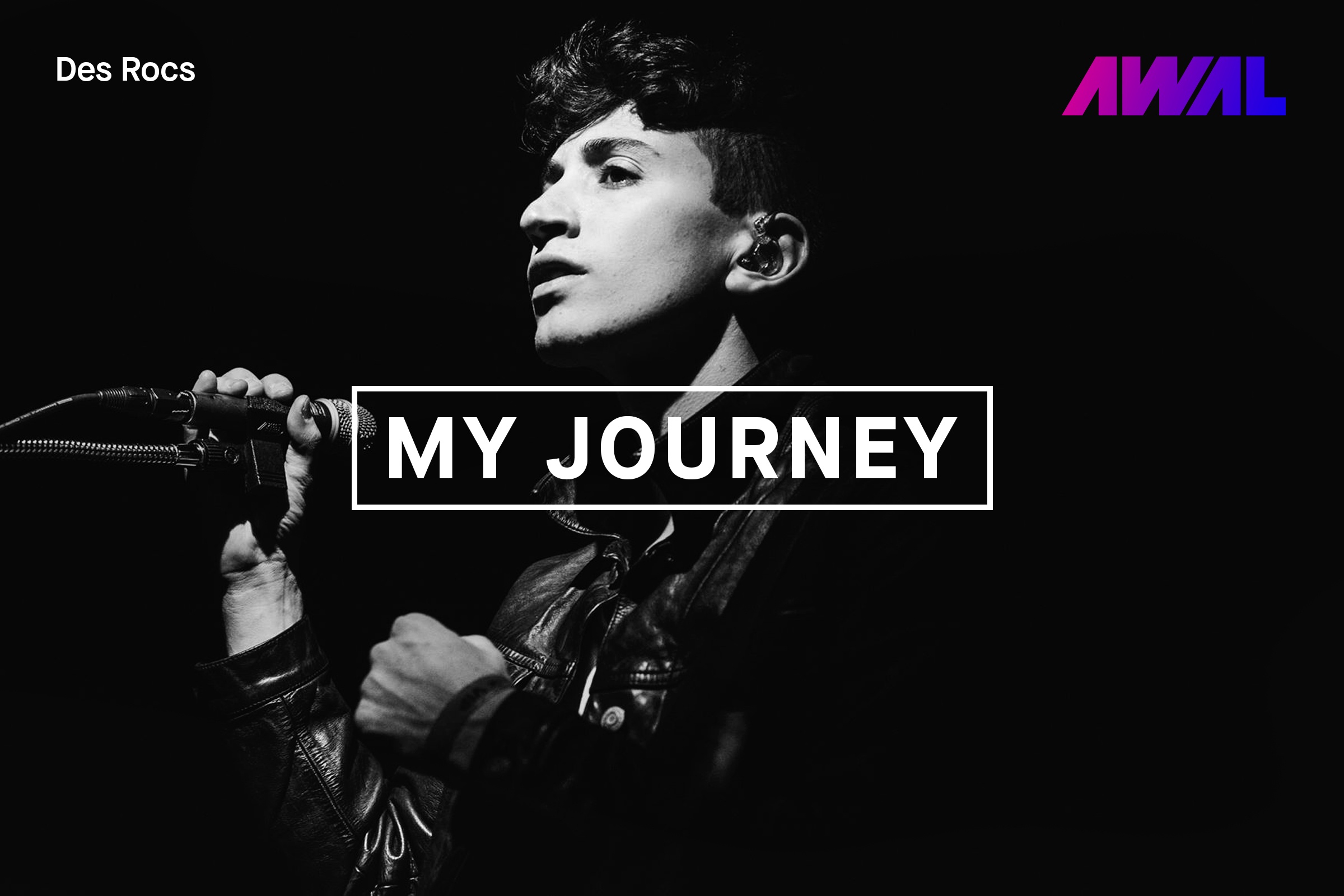 Few artists drop down on DSPs without warning and demand your ear. Enter Des Rocs.

The Brooklyn-dwelling artist-producer has proven himself a reliable source of larger-than-life stage stompers after just three singles, each one designed to blaze through stereos across New York and beyond. His vision is crystal clear, and it includes arenas. Expect to catch him in one by 2021.

Hundreds of thousands of listeners have rewarded the rising rocker for his explosive versatility. He swings straight into unhinged shredding after leading with vintage bluegrass. Save his music if you’re in search of a quick release, the distinct sense of reckless abandon, and production with enough punch to scare the neighbors. Don’t think twice when you press play, just embrace what comes next.

AWAL spoke with Rocs about the true definition of “rock star,” the spirit of independence and how city living pushes his creativity. Keep scrolling for a shot of charisma.

When did you know you wanted to bring glory back to rock?

Glory’s been in my bones since I first started making records. I grew up on bands that raised their fists in stadiums. It’s an energy that I couldn’t escape even if I wanted to, and for some reason it’s an energy that doesn’t seem to be popular in rock anymore.

Do you get excited seeing more hip-hop artists calling themselves rock stars?

Absolutely. I think the “rock star” mantle defies both genre and music altogether. An actor can be a rockstar. I had a teacher in high school who was the most bad ass rock star that’s ever graced the earth. I’m excited by anyone who truly embodies the mindset.

What’s an important lesson you learned from Secret Weapons that you’ve applied to your current work?

I’ve learned that when it comes to making my records, I’m gonna make whatever the hell I wanna make. If it’s true and if it’s Des Rocs, then that’s all that matters. I’ve got to feel a record on a primal level for it work and for it to be a Des Rocs record. Everything else you can throw in the trash.

Is the NYC rock scene in good health? Is the city’s rock history important to you or are you largely just concerned with your own journey?

No. NYC rock is scattered in bedrooms and shared studios spread from the bronx to queens. Now and then I see kids turning the knobs on a big muff pedal and it gets me going, but it’s not a living and breathing culture where lots of kids are connected and going to each other’s shows at the same venues.

The history is incredibly important to me—NYC is hallowed ground—but my records are different and my journey is different. This city is more important to me because of its energy —the urgency of it all, this beautiful mess of humans and cultures and subways and music and almost gettin’ cracked by a taxi and flipped off, all before I had my first sip of coffee.

“Let Me Live / Let My Die” kicks off with this pure, riot-inciting emotion. You’ve been vocal about the power of “rock” when it stands alone, no additional qualifiers necessary. Have you encountered others—promoters, managers, publications, fans, whoever—that feel the same way? Do you feel like there’s a giant group of people waiting for someone like you to rise? (I do.)

First off, thank you for using the phrase “riot-inciting emotion.” Second, the people waiting for my records and my show are the people themselves. I see it in kids eyes when I’m on that stage and I see it in the DMs. I think our culture needs guitars again and I’m gonna give it to em.

Do you feel that the spirit of rock is intertwined with this idea of independence? How has your own career embodied that essence if so?

I think the spirit of rock is intertwined with a rebellion against dependence. In that sense, rock is really independent minded—it’s rooted in this idea that you can make records in your garage and literally “DIY” when it comes to everything. My independence on the other hand is a bit different. I make records in a way that most would find unbearably lonesome. I don’t chase trends and never will. My vision is about being independently true to myself at all times.

Someone sees you live for the first time. What do you want them walking away thinking?