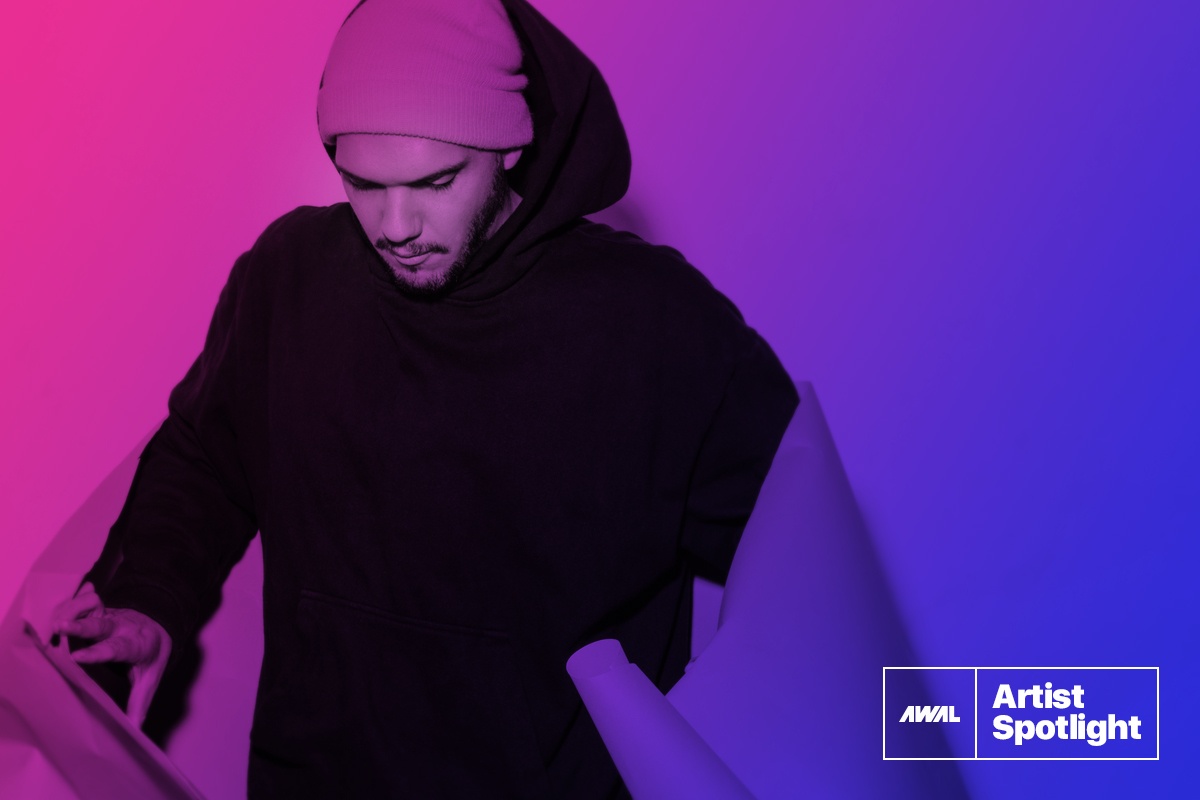 Creating Outside the Box & Just Doing Your Own Thing with NVDES

Driving down a Los Angeles street one day, Josh Ocean spotted an eye-catching sign adorning a strip club that read “Live Nudes.” Like many musicians, Ocean’s first thought was, “What a great name for a band,” but a quick Google search later revealed that, of course, it was already taken.

On a whim, Ocean typed in “N-V-D-E-S” and found the slight alteration of the same sentiment was completely free. It was almost fate that this purposely provocative expression would become the name of Ocean’s “creative collective” of digital manipulation of licks, sounds, and lyrics born from a wealth of collaborations with his friends and fellow artists. By its very nature, it’s way more than just a band — Ocean prefers the term “art project.”

“NVDES is my world. NVDES is the universe I created,” says Ocean. “It’s both completely my project, because when you hear it, it’s very much my musical expression, but it’s definitely founded and operates completely on a collaborative platform. That’s why I don’t really like to put it in any sort of category. It is what it is.”

NVDES, as a vehicle for Ocean’s creative expression, can oddly be traced from tech giant to tech giant: When he was in college, Ocean started posting tracks on Myspace. Today, 11 years after he made music his “complete, full-time focus,” and just over two years after he began releasing music as NVDES, two NVDES bangers, “Do Your Thing (D.Y.T.)” and “Turning Heads” are heard worldwide on Apple iPhone X commercials and, to date, have nearly 1.7 million streams combined.

“There are different ways in which artists find ways to sustain themselves and sustain their art,” says Ocean, “and for me, [these placements] have been just an amazing gift to be able to keep focusing on my art, so I’m super thankful.”

Like many artists, Ocean spent time playing in bands and working with other musicians. After moving to LA at the end of 2014, he set up a studio in his apartment and began jamming with friends. From there, NVDES became “a very natural kind of evolution out of my living room.”

Although the music NVDES spawns is hard to pin down beyond “catchy as hell” (is it electronic? is it pop?), Ocean commonly dubs it “laptop punk.” The label is less about the genre of music, however, and more about the spirit behind it. “When I was 13, I wrote a song all about how punk was a state of mind,” he says. “I was just so inspired by the energy of ‘We’re going to do something on our terms.’

“That’s kind of been my ethos with NVDES: produce, make art, make music, just go. Don’t think about what it has to be. Just do it, and don’t stay in the box.”

In order to avoid those boxes as much as possible, Ocean made a conscious decision to only release singles and EPs — never albums. Fitting songs together into a cohesive unit and waiting for the perfect time to unleash a collection is an impossibility for NVDES because, “If I sit on something too long, it starts to turn kind of toxic for me,” he says. “When I’m super inspired by something I’ve created, I just share it. I want to embrace that inspiration rather than fight it, like putting something in an album box.”

Although he originally released music on AWAL via indie label B3SCI, Ocean was inspired to develop his own collective and landed a funded deal to support his projects. His last two EPs, LA NVDITÉ Vol. 1 and Vol. 2, were released under Maison Nvdité, a label Ocean specifically set up for music put out through AWAL.

“As far as partnering up with a company that enhanced my vision for being able to put out content in any way that I wanted and not have to put my release plan or anything into a box and very much sit with my natural flow of creating, we went to Kobalt/AWAL, and it just clicked very well,” he says.

“Working with NVDES has been another dimension of creative stimulation,” says Sarah Landy, SVP, AWAL/Kobalt Music Recordings. “When we were discussing a new AWAL deal for LA NVDITÉ Vol. 1 with funding and master-synch representation, there was already a solid foundation there from the previous efforts of the NVDES team and B3SCI.

“So, it was a combination of the new music really jumping out to us from a streaming and synch perspective — not to mention the sheer fun of it — and the fact that there was momentum in the engagement and awareness for NVDES that ultimately landed the funding deal.

“It couldn’t make me happier to be empowering NVDES to be making the music that NVDES wants to make, while providing rounds of funding in steps with different projects.”

One major aspect that Ocean says has been bolstered by his AWAL funding is the ability to create visuals to complement his music. The music videos that accompany tracks like “Turning Heads” and “Everyday” pioneer a looping technique that’s tailor-made for the social media scene, perfect on platforms like Instagram and the belated Vine.

“The way people interact with media through platforms has changed the way people experience everything,” he says, “so I wanted to channel that into the music videos so people could digest and get inspired that way.

“It’s important we create this world so when people are listening to the music, then they Google us or go on Instagram, they have this whole world to dive into. This partnership we have with Kobalt/AWAL is essential to helping us do that.”

By remaining independent, NVDES is able to shapeshift into everything Ocean ever envisioned. Today, he says, the internet responds to things that are “in the moment, loose, organic, and honest.” Presumably, at least in NVDES’ case, those things are achieved by creative freedom away from boxes like stakeholders and major labels. “I don’t think there’s ever been a better time to be an independent artist than this time we’re in right now,” Ocean says.

With an appearance at SXSW on the horizon, Ocean’s short-term focus is expanding the NVDES universe in the form of writing and creating as many songs as possible “with nothing really in mind other than just making as much stuff as I can.”

Beyond that, Ocean is, as ever, concentrated on spreading the NVDES maxim: be true, be yourself, be real — be nvde.

“There is no rule that says something has to be done a certain way,” Ocean says. “There’s nothing that says that you can’t do it the way that you want to do it. So you should just do it. That’s my mantra as an artist and my mantra for NVDES — just do your thing.”

If you’re looking for a true partner to help you take your career to the next level, become an AWAL member like NVDES!