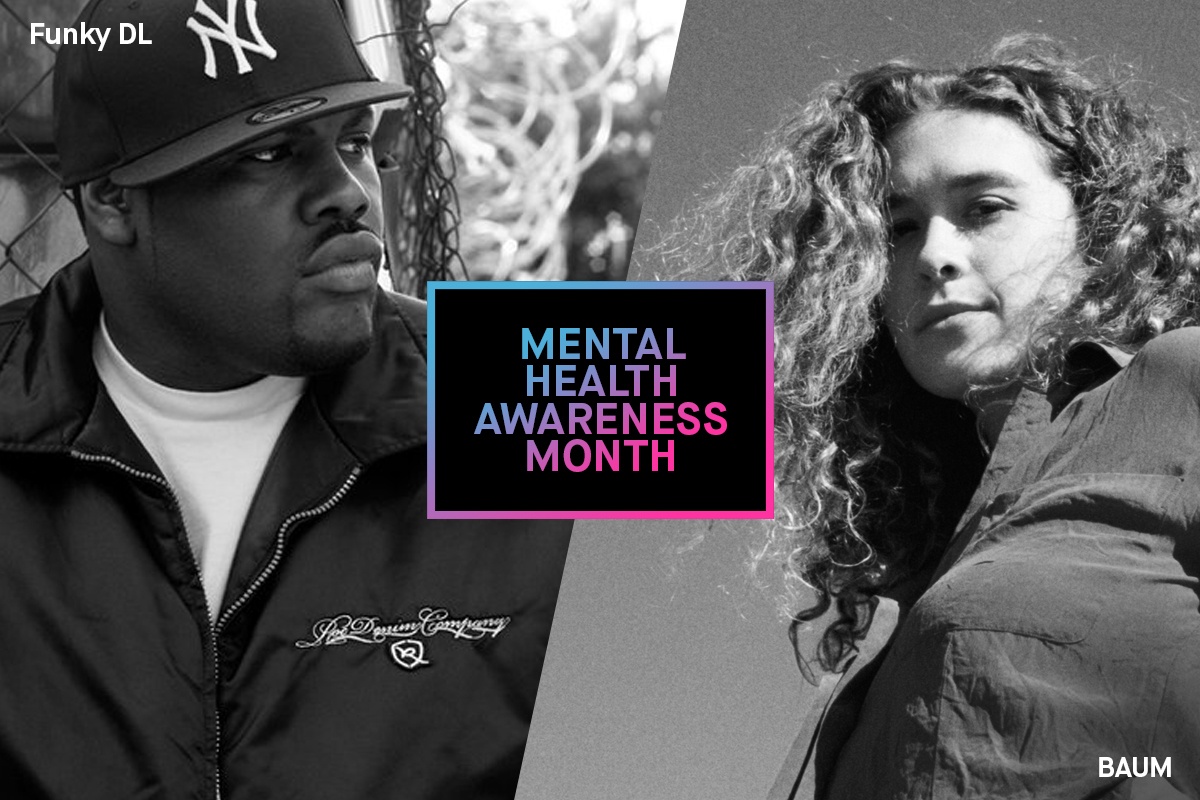 Every artist has unique challenges born out of their particular journey. Last year, the “Can Music Make You Sick?” study shed light on just how many artists count their own mental health among those struggles — 69% reported experience depression and 71% experience anxiety, among other startling statistics.

More and more efforts are being made to combat the musician mental health crisis, and artists themselves are starting to speak up about their own battles. Two of our own AWAL artists, Los Angeles-based singer/songwriter Baum and London native, hip-hop artist Funky DL, recently came together to chat about their own experiences with mental health awareness.

In her music, Baum addresses themes like body image and self-care; she’s also been candid about representation in mainstream media and open about her own relationship with mental health. Likewise, Funky DL attended one of our AWAL Sessions events in London with Dr. George Musgrave, a co-creator of the “Can Music Make You Sick?” study. Afterwards, he wrote an article that detailed his experiences as a musician, including many of the takeaways that Musgrave included in his findings.

These two artists are very different in regards to their styles, careers, and even locations, so we wanted to bring them both together to share their experiences with mental health in the music industry. They both spoke openly about why mental health is such an important topic of discussion for music today, along with how the music community is changing to destigmatize this emerging crisis.

AWAL: Talk through your journeys. What have been some of the challenges?

Baum: I started trying to be a professional from a really young age, probably before I was ready to musically. That made it difficult and confusing to figure out who I was at first as an artist. I took a step back and I went super introverted in terms of my music, and I took time to just flesh things out myself, and that was what really helped me. I found my voice through just living my life and then writing about it at the same time. From there, I was able to work with other people and hold my own.

Funky DL: I decided about 12 years old that I wanted to do music. By the time I hit 17, I was having demos and making plays on some of the biggest radio stations in London. By 19, I had landed a publishing deal and a record deal, and won Best Hip-Hop Act of ’97 at the MOBO Awards. But my deal came crashing down after two months of signing the contract. That was when I first realized how much difficulty can be experienced in the music industry.

I felt all alone, but very quickly made a decision to start releasing my own music, and I’ve just maintained that from 1999 until now. Although it’s been very difficult at times to navigate the record industry from the business perspective on your own, it’s also been the most rewarding.

AWAL: Funky DL, in the article you wrote after hearing Dr. George Musgrave at our AWAL Sessions, you said that artists should always do things that make them “happier.” Why is it so important to do things that make you happy, especially when some artists feel like, “I should take every opportunity that comes my way because I don’t know where it will lead. I don’t know if I’ll get another chance”?

Baum: How I can be my most authentic self as an artist if I were just taking every opportunity that came my way? There would be a lot of things to cloud what I actually want to be doing and the art that I actually want to be making. If I were going to sessions every day with people I didn’t want to be writing with or didn’t want to be working with, then I would end up with a lot of songs that I didn’t think were my truth, and that would be really disheartening and confusing as an artist.

Funky DL: I totally get it. In terms of happiness, what I use as a measuring stick is if it would make me happier not to do something, I don’t do it. I’ve had a relative amount of success, so I’m in a position where I can say that, “Okay, I’m not going to do that.”

It’s taken some time to get to this state of self confidence where I feel like nobody but me is responsible for my success. As I’ve progressed in my career, just become more confident in my ability and my direction and my vision and not put the responsibility in anybody’s hands for my success.

AWAL: What are your own relationships with mental health awareness as artists?

Baum: I’ve always been trained to be self aware about my mental health. What I’ve realized recently is just being aware of it isn’t necessarily enough. You have to be actively working on getting to the place that you want to get to. The biggest thing for me is trying to have stability in my life and structure, because there isn’t really a structure in terms of schedule. One week I’m in sessions all week, one week I’m playing shows, I’m in different places.

I try to set up rituals. I journal. I know what I’m going to be eating, so that I make sure that’s something I can have that’s stable in my life. I think trying to put things in place to anticipate the fact that there’s no structure in a musician’s life has been really helpful. Doing things actively, not just being aware of your mental health, but taking the time to be aware of it and then acting on it, has been important for me.

Funky DL: As a musician, it can be quite a lonely journey because most people I know work regular jobs, nine to five. My schedule has a lot of flexibility, so there’s times when I just feel completely isolated from everybody else. Sometimes, there are things that you can’t change immediately, but there are little things that you can do to improve on how you feel about where you’re at.

The other big thing for me is acceptance — to understand that I have been depressed before about certain things in my career, but it’s a level of acceptance to say, “It’s actually okay to feel this way.”

Baum: That is such a good point. When I get down, a lot of the time I find myself pretending that it’s not happening and wishing that I just felt better right away. What really works is to just be like, “Okay, I’m sad right now. I’m going to be sad right now and I’m going to just accept the fact that that’s the way I’m feeling today or in this moment, but it will change.”

There’s that fear when you get upset or when you get depressed, even if it’s just for a couple hours, that you’re not going to feel better, ever. I always have that fear of, “Oh my God, how long am I going to feel like this?” When you have a cold, you don’t have that. I think a lot of that is because we don’t talk about it and because we don’t accept it, and we feel like we have to get better right away. I totally, totally relate to what you’re saying.

AWAL: Baum, some major themes in your music include body positivity and self care. Those two areas can sometimes be seen as intrinsically related to mental health. Why is it so important to talk about them?

Baum: It’s crazy to me that it’s something that finally is being addressed in mainstream media. Literally, I do not know one woman who has not suffered from some sort of stress around body image. There are women who still suffer from, “I don’t look good in this dress.” It translates to, “I’m not lovable, I need to do this behavior, I need to think this way.”

People are self loathing about their bodies without even realizing it. That was the biggest thing in my mental health and I didn’t even know it. Being an artist, one of the things I’m most excited about is being a normal-sized person and looking the way that I look. I’m not shaming anyone, but I feel like, growing up, I didn’t have enough representation.

Funky DL: That ties into how artists feel that they’re being perceived: how do I look to my audience, how do I look to the general public and how do I come across? Whether it’s in hip-hop or outside of hip-hop music, there’s often a bravado. It takes somebody to be quite brave, I guess, to really speak their truth in their music.

AWAL: Is it important for artists to share those lows and be honest about it?

Funky DL: I do think it’s important, but I think it’s about when the artist feels there’s a necessity for them to disclose whatever it is they choose to disclose.

Baum: I agree. Just because you’re an artist does not mean that you have to tell everyone everything that has happened in your life. Certain people are more private than other people, and if you don’t feel comfortable, you do not owe it to the public.

At the same time, there are a lot of people who are not as private. I’m not uncomfortable talking about various things that have happened in my life. For those people, it’s important that you share things, because if you have a big platform, that’s how people can relate.

Seeing that others have gone through ups and downs is really important. Just like getting visual representation of people who look like you, whether that’s through diversity in mainstream media or body-type diversity, it’s just as important to get representation in terms of mental health and personal struggles.

Thanks so much to Baum and Funky DL for sharing their experiences with us. The fact that these two artists from such separate spaces and places have so much in common when it comes to thinking about mental health awareness shows that it’s a present piece of many artists’ lives. That’s why it’s so important to continue the conversation around this crucial topic.

Check out the two previous articles in this series: