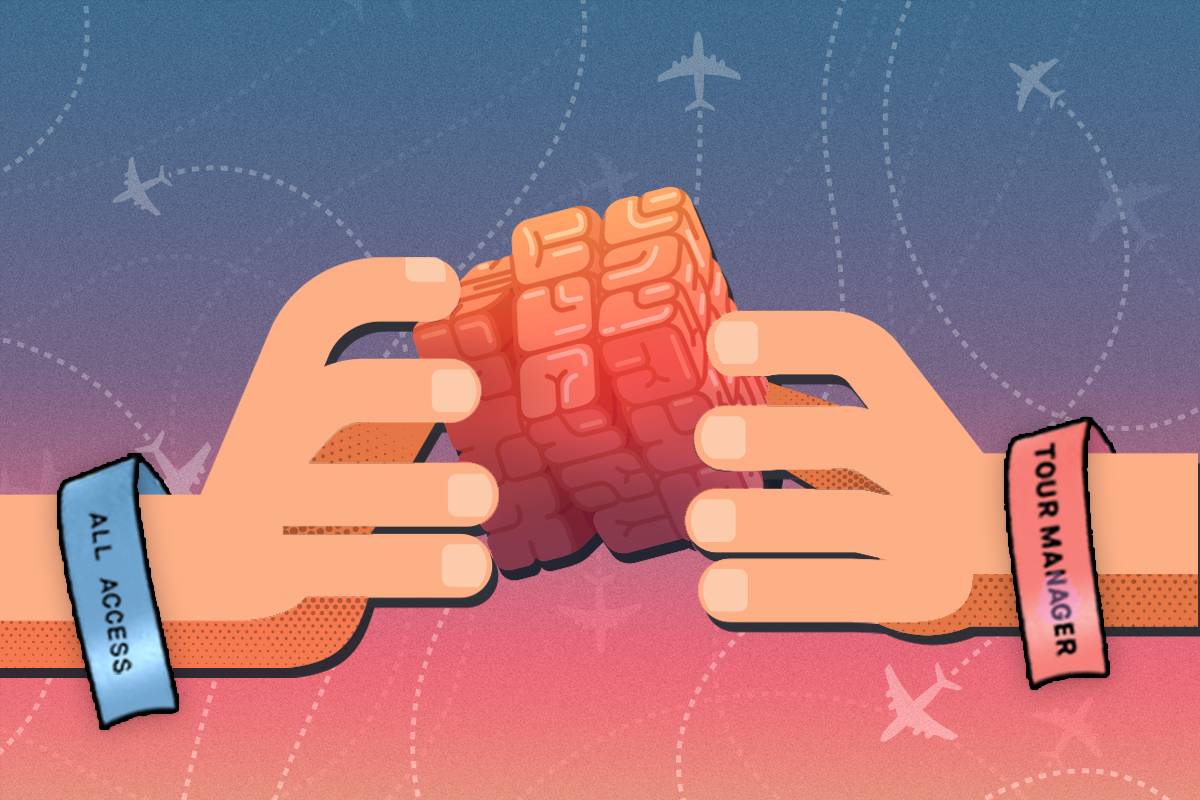 This is the second piece featuring tour manager Stacy Wiseman. Click here for the first read.

Smooth sailing is learned, not given. Dodge, dip, duck, dive, and dodge your way around enough nonsense on tour and you’ll find there’s no such thing as a picture-perfect run. Fortunately, there’s lots to be done in the risk mitigation department, and Stacy Wiseman, who’s traveled the world alongside the likes of Lizzo, Hannibal Buress, Iliza Shlesinger, Mallrat, and more, knows a thing or two about keeping trains on the tracks.

Whether you’re plotting your first road campaign or in the midst of an international headliner, forward march for 10 lessons from Wiseman worth keeping in mind. But first, before you do, a few more words from us. It goes without saying that good decisions don’t always come easy when you’re in the thick of it — we get it, consider this a no judgment zone. If sleep’s a foreign concept, the bus broke down last night, and you just said hello to the 630th face of the day as your temperature hit fever territory, any source of numbing comfort looks like a great idea.

If there’s any trick to self-preservation, though, it’s not letting mistakes become patterns. One regrettable night doesn’t need to lead to a washed week. When teams rally together to sidestep unhealthy choices and identify probable issues in advance (e.g. blocking off time to hit the hotel gym, or packing non-habit-forming substances like melatonin to help everyone recharge), there’s a lot more good and a lot less bad. Godspeed, yall.

Expect your first tours to test — and strengthen — your endurance.

“I worked with Louis the Child I think for 14 months or so as their first tour manager. Literally, Freddy had just graduated high school, and he had the number one song in the country because him and Robby wrote The Chainsmokers’ drop for ‘Closer.’ So they were just these kids. And it was a huge learning experience. Our first tour was in a Sprinter. I mean, it was a crazy time. I feel like every tour manager should do a Sprinter van before they graduate to a tour bus, because every time I do tour buses now I am just so grateful for them. Because it was … It had it’s time, but it was miserable in the van. You’re literally sitting in the captain’s chairs for what feels like an eternity. Our openers were on a bench in the back, and we’re doing eight hours drives and not really getting much sleep, and then having to load in when we finally arrive.”

Exercise often, especially when it’s the last thing you want to do.

“This past year, I took a good chunk of it off, after I helped TM for Hannibal Buress’ comedy run. A road team could be 15 people or two people, but as the tour manager, you’re always putting others above yourself. It took me awhile to realize the toll it had on me. Now I try to bike every day. I think I did 75 miles this week. It’s even more important for artists: a day can feel like a week and they blend together. Before I start a trip, I research in advance to see which hotels have gyms and try to block time off, and I always ask if anyone on the team wants to join me the day of. You have to help each other out. I recently had a 12-hour flight with Iliza [Shlesinger], when we went to Portland, Maine, and I just wanted to crash. She was like, ‘Nope, let’s go workout for 30 minutes,’ and I felt happier and refreshed.”

Give your immune system a hand before it starts hurting.

“Every hospitality rider I’ll ever make will include fresh-pressed juices and raw ginger shots. When I gave San Halo one for the first time, he was like, ‘What is this? Are you trying to kill me?’ By the end of the tour, he was like, ‘Where are my raw ginger shots?’ On another tour, one person started sneezing in the back of the van. The next day, another one had joined him. I’m thinking, ‘Ah shit, here we go’ [Laughs]. One of my jobs is to try and avoid that and be proactive, because one sick person can sink the whole ship, but everyone has to be onboard. I’ve even done group stretches before soundcheck in the past.”

Love your stomach. Food that’s cheap and fast will set you back.

“You can eat shitty every once in awhile, but having Chipotle and Domino’s every night is going to slow you down and make you feel like crap. Do it enough and your mental health will suffer. When you’re tired from performing and traveling nonstop, the temptation is to feast on the densest, cheapest, closest thing, but most of those options will make it worse, or give you the wrong nutrients. Sometimes the $0.99 hamburger is really all there is, but if you get fruits and meats in advance, or make your rider more healthy, you can get what you need without spending a fortune.”

“I have a two-drink rule with everyone I work with. Next to the artists themselves, I’m basically the leader, and I’m there to make sure everything goes smoothly. I’ve seen multiple tour managers and crew members get shit-faced and cause problems at festivals and shows, crossing that line of respect you’re never going to get back again. Like fighting security guards, or TMs on smaller tours getting hammered when they’re supposed to drive. It’s a lot of fun, but it can’t be a rockstar lifestyle 24/7, at least not for the team.”

Treasure sleep for what it is: the most valuable asset on the road.

“Most nights there’s enough time for a shower, one beer, or passing out. If load-out after the show is at 1:00 a.m. and that takes two-and-a-half hours and there’s a 5 a.m. afterparty, like with a lot of EDM tours, you can’t be messing around too much. Some of my friends working with major DJs are flying to five countries in three days to do 10 shows or parties. I’ve been up for 72 hours straight and I don’t say that with pride. Younger TMs on the rise now ask me how you know whether you’ve made it as a tour manager, and my answer is when you’ve started hallucinating from exhaustion, because the schedules get that intense. When you’re backstage, you’re really just on your computer, making sure whatever’s next will be alright. If you can fit it in the budget, having a hotel room with double beds to let people rest in and out during the tour stop is helpful. Or a lot of times, when we can have early venue access, I’ll try to get the bus there 30 minutes to an hour early so people can lay out on the couches.”

“If a tour is covering lots of ground and it’s not jetting from one place to the next, the designated driver should get the crew in safely, park the Sprinter or the bus, go to their hotel, and be back the next day or whenever the call time to pack up is. If you give your driver extra jobs, the odds that they’re not rested enough increases. They’re legally required to never drive more than 10 hours straight without an eight-hour break.”

Run a tight ship by tracking every dollar / maximizing every minute.

“We’ll make two-page informational packets for the openers to cover frequently asked questions so we’re all on the same page. Most of the riders are six to 10 pages. For hospitality, I usually have to write something like, ‘All receipts must be turned in, taped on pieces of paper, with the correct charges circled.’ If you someone loses a receipt, you have to give that money back. You have to keep your records clean and accurate. When I don’t say that, the runners come back to me with crumpled money, change, and missing receipts, and that’s time a TM won’t have. Even something as simple as calling ahead matters on tour. If you need something specific from Guitar Center, call before you go. Wasting energy doesn’t fly.”

Have high expectations for all things security-related.

“When runners are taking the artist from one place to another, they shouldn’t be on the phone. Security guards shouldn’t be on the phone, or taking pictures for fans at the barricade. A lot of them aren’t getting paid a ton, even at major festivals, and sometimes you’ll have people paying to get past to the artist pit. Once there was a security guard for stage right, which can lead to the artist’s backstage area, and he was using his phone multiple times. I was like, ‘What are you doing?’ He even admitted it to his  supervisor. And then he told me I shouldn’t be a tour manager because I’m a woman with issues. That got him fired. I become a mama bear if these things aren’t taken seriously, if the things we discuss in our security meetings aren’t followed. Nowadays evacuation plans and all of that are pretty standard, which is devastating, but I want to feel safe. There was a show not too long ago where they were like, ‘We don’t do bag checks,’ and I was like, ‘Absolutely not, that has to be protocol, I don’t care if we have to hold the doors another 15 minutes. Lots of venues have metal detectors backstage too now. I want that. I want everyone to feel safe.”

Spare women the bull shit and get out of their way.

“I’ve been doing this for awhile, but I still get hounded — old school assholes who’ve worked at venues for a long time, drunk stage hands who’ve pushed me against a wall calling me a piece of shit. People telling me, ‘Come home with me or I’ll make your career suffer.’ A few months ago I was buying goosenecks for some mics and one of the sales associates sort of ignored me. He’d just relay through his coworker, ignoring my existence. Now, I’m from the south. I will call your ass out. I’ll kick your ass and then make you some homemade sweet tea, you know? But it just pisses me off. Grow the fuck up. Yes, I have a vagina and tits. You have a dick. Congratulations. We’re all here trying to make a show awesome. In some of the most tense moments I’ve learned to just laugh. That really throws people off. I’m proud that it’s becoming harder to get away with that behavior. We’re doing a show in front of 1000s of people. Get over yourself and do your job so I can do mine.”