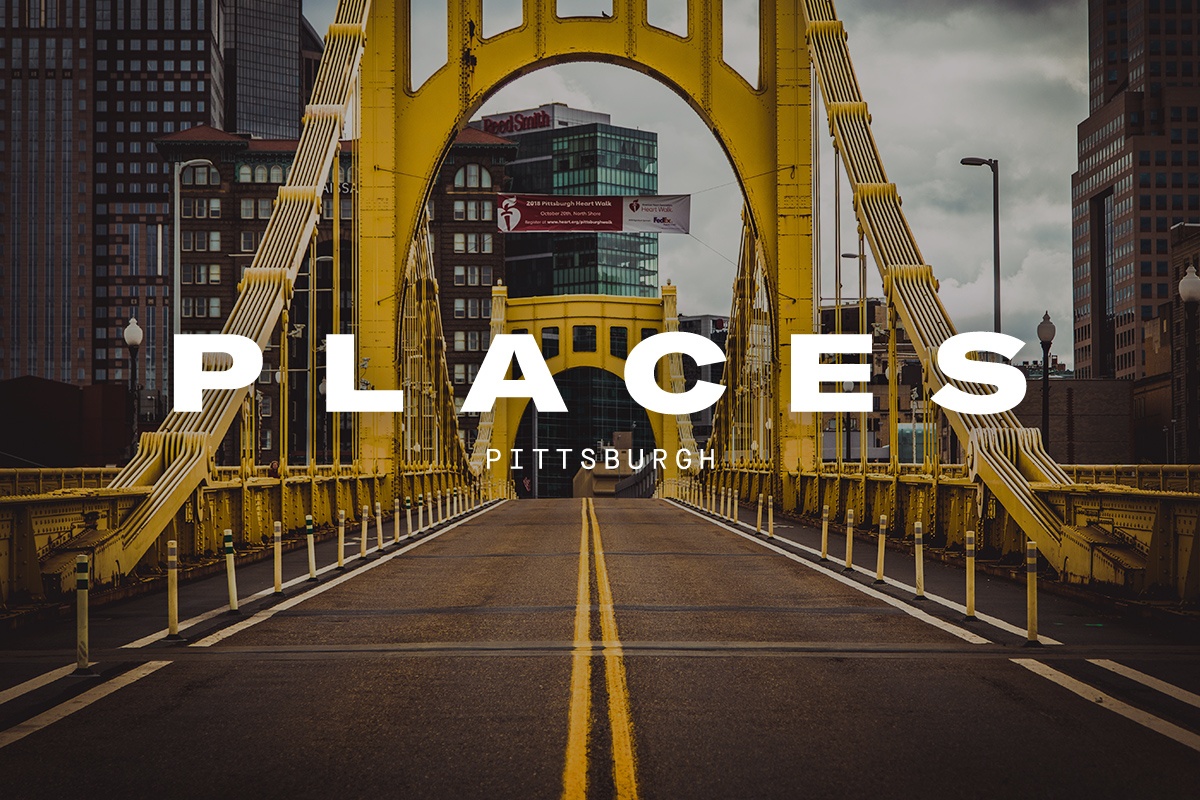 You’re on tour. You’re tryna figure out what’s good in each city. We’ve got your back. Dodge road boredom with AWAL’s PLACES. First stop: Pittsburgh

A few weeks ago we dropped into Pittsburgh to check out Kevin Garrett’s hometown studio with our new series SPACES. Like literally everyone we’ve ever met from the Steel City, Kevin proudly reps his hometown. So we decided to dig in.

Located near the midpoint between New York and Chicago, Pittsburgh is a key stop on most US tours. It’s also home to a diverse music scene that’s bred some of the top hip-hop artists in the industry, a long and storied punk rock movement, and a thriving, ever-evolving Americana scene.

Today, musicians stopping in Pittsburgh can expect to find both expansive, multi-purpose music venues and gritty, intimate listening rooms alike — plus about as much cheap, tasty food and Yuengling as you can pack between three rivers.

Whether you need studio time, a quality gig photographer, or you’re just looking for a good spot to post up, we’ve got you covered. Here’s what you should do the next time you pass through Pittsburgh.

Do you know that one music venue in your home city that you spent every weekend at as a teen? This historic church-turned-venue across the Allegheny River is that spot in Pittsburgh. The 800-cap venue welcomes mostly rock, hip-hop and some country acts, and it recently opened the smaller 175-person Funhouse just upstairs.

This homegrown clothing line outfits just about all of the city’s hip-hop artists, and the owners also host monthly showcases featuring the city’s best rappers and DJs in their Garfield shop.

Pittsburgh vinyl collectors were devastated when Jerry himself retired last year, but thankfully, his packed-to-the-brim record store in a second floor storefront in Squirrel Hill is still alive and well. Be warned: you’ll most definitely lose a few hours of your day as soon as you step through the door.

Shop graffiti-inspired streetwear, zines and art at this Garfield shop, which also hosts in-store appearances and concerts from local and touring hip-hop artists.

If you’re simply looking for a place that you can go to hear live music any night of the week, Club Café is that spot. There are early and late shows every night of the week in the intimate South Side listening room, plus comedy performances, open-mic nights and a well-stocked bar.

With a central location just next door to Heinz Field and indoor-outdoor capabilities, Stage AE is definitely Pittsburgh’s most state-of-the-art venue. Outside, the amphitheater can hold 5,500 people, while indoors, there’s a 2,400-person-capacity room and a smaller 500-person nightclub.

On Wednesday nights, the Pittsburgh Banjo Club plays at the Elks Lodge 339 on the North Side. It’s weird, it’s wonderful, and it’s a scene. Once you see it, you’ll get why so many of the city’s not-so-elderly residents go every week.

It’s a bit outside city limits, but Pittsburgh musicians say it’s more than worth the short drive. The independent music store has a knowledgeable staff who love to talk gear, a huge assortment of inventory and they even offer equipment rentals

The Pittsburgh home base for both Wiz Khalifa and Mac Miller, ID Labs’ Etna studio also offers mixing, mastering and production for local and touring artists. Hip hop is the focus here, but the roster is huge and pretty diverse.

Local rock, folk and Americana artists love this studio, which is housed in an old brick church in a sleepy Pittsburgh neighborhood.

Josh has booked punk and indie rock shows in Pittsburgh since he was a teenager, but today, he manages bands and otherwise supports the local rock scene in a big way through his management company, Secret Frnds. His roster includes the Homeless Gospel Choir and The Voice alum Chris Jamison.

Nick is your guy for professional, affordable (perks of a smaller city) band photos, live concert shots and music videos in Pittsburgh.

Arguably the most popular guy in Pittsburgh, RB hosts events through his promotion company Make Sure You Have Fun and his streetwear brand, FarESH. He’s known for bringing up-and-coming hip hop artists and DJs to Pittsburgh, as well as creating themed events like the ever-popular Drummer vs. DJ and early-2000s hip hop night Tall Tees.

This Pittsburgh-based crowdfunding consulting company specializes in getting music projects off the ground, whether it’s funding an album or finding the support for your next music video. With a roster of projects that includes country singer-songwriter Lindi Ortega, local pop-punk band Punchline and Pick It Up!, a soon-to-be-released documentary about ska in the ‘90s, the guys behind Craft Services are the people to know if you have a great musical idea, but don’t exactly have a great budget.

What Brooklyn is to New York, Lawrenceville is to Pittsburgh — right down to the area’s formerly industrial roots. If you’re looking for a place where you can drink good beer in a beautiful space, stumble upon cool, modern restaurants at every turn and just kinda blend in with the city’s young artist community, this is the neighborhood.

If you’re playing Mr. Smalls, one of the city’s go-to rock clubs, you might feel a bit isolated across the river from the city itself — but you shouldn’t. This up-and-coming area is still about as old-school Pittsburgh as it gets, and it’s well worth sticking around before the show to check out its row houses, breweries and cafes.

Stage AE sits just a few streets away from the Deutschtown neighborhood on the North Side, where you can wander through streets filled with 1800s row homes (some of the most historic in the city), find great coffee or spend the afternoon at world-class museums like the Mattress Factory and the Andy Warhol Museum. It’s also home to the annual Deutschtown Music Festival, which happens each July.

If you’ve heard anyone say anything about Pittsburgh’s most famous restaurant, it was likely “You have to go!” Pittsburghers love Primanti’s (and love to talk about Primanti’s), and if you like French fries enough to put them inside a huge, meat-filled sandwich, then you’ll love it, too.

Your typical greasy spoon diner, best known for their crepe-style pancakes. There are locations all over Pittsburgh, including one in Millvale (just around the corner from Mr. Smalls) and the Strip District (a short drive away from Stage AE).

Located below the venue of the same name, this South Side bar is the place for really good, cheap bar food (and that says a lot in a neighborhood with more than 80 bars on a single street).

Photo by Lucky Munro for Imbibe

The city’s predominant yinzer-meets-young-artist bar. Located in Polish Hill, this smoky dive is actually a dive — no subway tile or cocktails to speak of. Order the pierogis, grab a Yuengling and hit the juke box (unless there’s a punk band playing in the back room, in which case, do that).