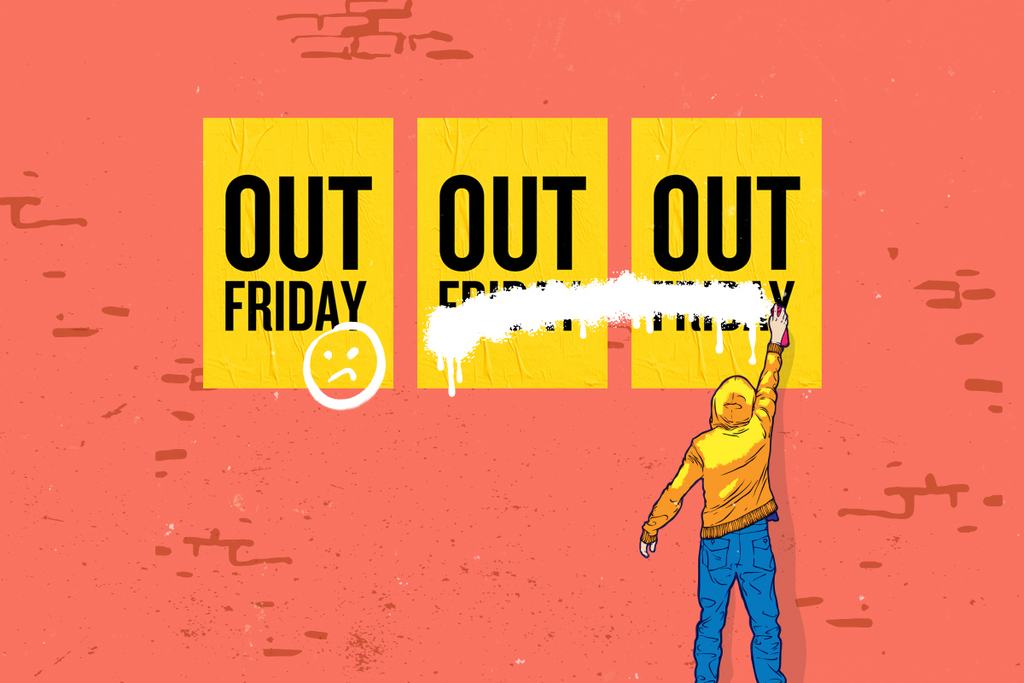 Past Due: The Rise & Fall of Album Delays

Once upon a time in hip-hop, release dates felt like empty promises, and bated breath became the default setting for many devoted crate diggers. As early internet forums evolved into the peak blogosphere era of the 2000s, in which avid listeners documented music’s final years as an ownership-driven business, a familiar headline became all the more commonplace:

Some fan bases adapted faster than others. Conditioned to expect the unexpected, longtime supporters of Kanye West have endured delays during eight of his 10 rollout campaigns, stretching all the way back to his 2004 debut. His consistency represents an extreme, but the act of pushing back does not. A generation came of age and walked away with one shared assumption: the most hyped records of any given year probably wouldn’t launch as planned.

Hip-hop’s relationship with pushbacks is almost mythical for folks born before Y2K. The absence of projects big and small, from Dr. Dre’s Detox to Jay Electronica’s Act II: Patents of Nobility, loomed overhead. Coveted projects that never came were an uncomfortable reminder: the worst-case scenario for diehards — aka a disappearing act — wasn’t only possible, but happening in plain sight.

And then it didn’t. Or so it seemed. Everything changed stateside when streaming became the dominant method of audio consumption. If you ask longtime fans and industry professionals, most would argue rap’s race to delay followed suit. Why’d it happen so frequently in the first place? Why’s it happening less? Is this whole thing fact or fiction? You decide.

Why Delays May Have Hit Hip-Hop Harder

Why Delays Happen Less (And What It Says About Music)

In conversation with A&Rs, artist marketers, and journalists, it seems clear that album pushbacks are far from standard operating procedure in 2019. Theories run the gamut. While some speak exclusively to hip-hop, most reflect macro evolutions in how music is created, distributed, consumed and shared. Rap’s predispositions might make the changes we’ll discuss a bit more visible, but they affect most genres, in most territories, as streaming remains the principal method of listening for many millions.

Music’s supply chain has evolved to crunch lead time requirements by a wide margin, moving from the physical demands of CD manufacturing, which coexisted with iTunes purchases (and lots of torrents), to a monetized, digital distribution network. Back then, if a guest verse came a week late, it could directly move a release date because it directly affected the ability to manufacture. Today, with lead times shortened to mere weeks, this constraint doesn’t exist anymore. Combined with streaming’s role in mitigating piracy, independence from manufacturing enabled the leak-free surprise album to exist, effectively making release dates, once the crescendo of a months-long marketing plan, arbitrary.

“It used to be religious,” The Root writer Panama Jackson remembers. “I can tell you big dates. September 29, 1998, Jay Z dropped Vol. 2… Hard Knock Life, OutKast shared Aquemini, [A Tribe Called Quest] had The Love Movement… We’d be at Tower Records at midnight, ready. No one cares like that about most albums nowadays. We’re not tearing open digital files like it’s Christmas.”

Meanwhile, the ability to distribute quickly formalized early mixtape culture. All of a sudden, hip-hop’s entrepreneurial spirit became technologically feasible, and the audience’s appetite for consumption multiplied. Meanwhile, perfectionism — in itself a key catalyst for album delays (sometimes for the better, in all honesty) — took a big hit. As algorithms increasingly rewarded consistency and listeners rapidly moved from one release to the next, the content rat race hit music. Streaming started to lead radio’s programming, and marketing budgets, often front-loaded to jumpstart a long album cycle modeled after movie promotions and record-breaking box office sales, became as much of a source for post-release fuel.

There’s simultaneously less pressure to build toward “The Date” and more difficulty in sustaining attention — just two reasons why it isn’t strange to see a lead single drop weeks before the full length it hails from. The opportunity cost of pressing play has never been higher because there’s never been more to listen to. It’s easy to move on when abundance and access coexist as they do now.

If we’re being really real about this topic, it’s important to make a distinction between delays and perceived delays. It’s obvious but easily forgotten that much of what we remember revolves around what others document. In other words, if an album got delayed and 30 press outlets and 30,000 frustrated fans didn’t write and tweet about it, did it really get delayed?

Hip-hop, however marginalized for much of its existence, has always pushed above its weight in the media. While many genres continue to have dedicated media outlets, few enjoyed the same degree of coverage that rap has received from its own community, be it magazines like The Source and Vibe in the ‘90s or ever-influential forums like /r/HipHopHeads on Reddit.

Those outlets provided teams a vessel to communicate rollout shifts as they arose, even if those comms didn’t tell the complete story. According to one A&R executive who asked to remain anonymous, sample clearance issues often amounted to little more than a “media reason” to explain a missing project — easy cover for a label worried about the performance of a single. “99% of the time, the label wants to clear samples well in advance of releases,” he says. “Sometimes that happens in the 25th hour, but it’s rare.”

Behind the closed doors of studios and company offices everywhere, projects continue to get delayed, and deadlines come and go. It’s really public spectacle that defined the collective memory of delays, and outliers aside, it’s public spectacle that seems less relevant today. There’s little reason to imagine that changing any time soon.