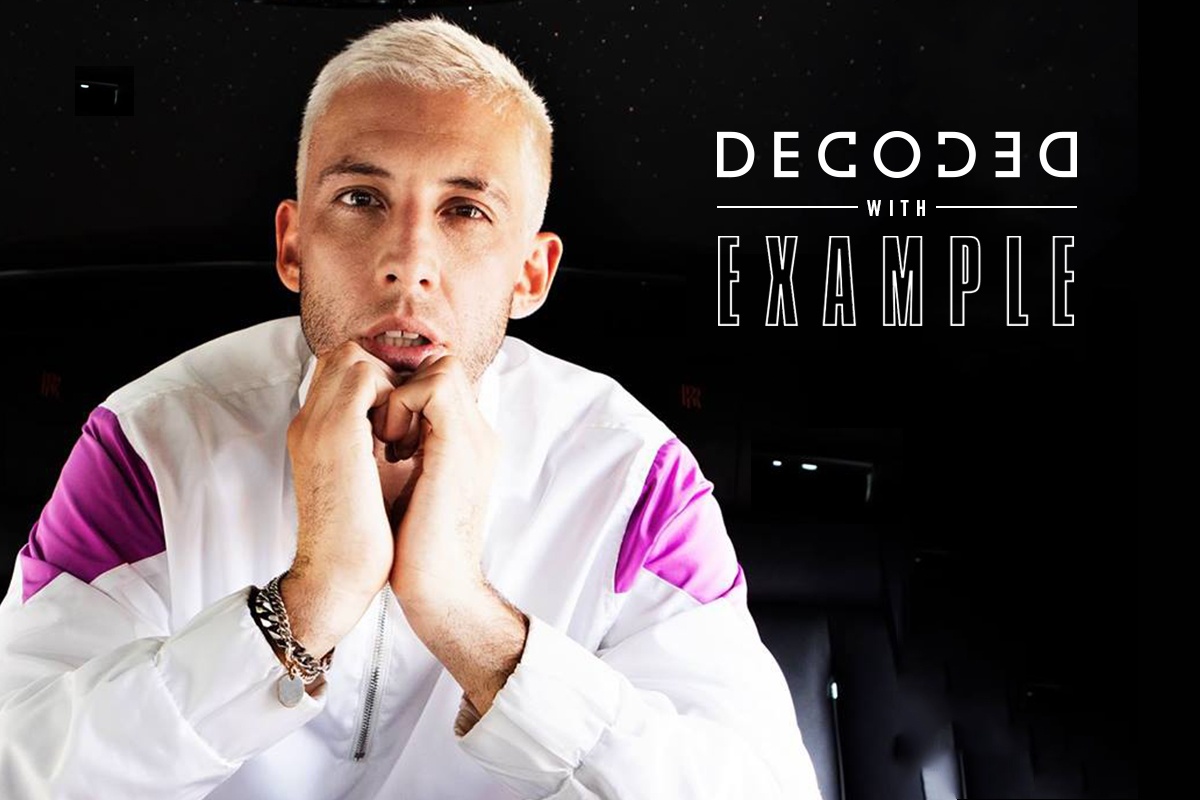 Myspace still reigned when English artist Example kicked off his music career. The early internet era brought him new friends (Lily Allen, Calvin Harris) and big lessons from rising bands like the Arctic Monkeys, who handed out free CDs to drive people toward their online HQ.

In the years since, Elliot Gleave racked up hundreds of thousands of followers of his own, a handful of UK hits, and a masterful understanding of artist marketing. Whether it’s checking boxes with Snapchat ads or making a big splash with random acts of kindness, Example has evolved into a black belt brand expert.

During an hour-long sit down with AWAL’s digital marketing VP Aaron Bogucki and Buzzfeed’s Lara Dowd, the busy writer-producer-rapper-dad talked off cuff about all things marketing. We’ve distilled his key takeaways into 10 quotes that provide concrete examples (sorry) worth mulling over. In short? No rules apply. You know the drill: Keep scrolling to get to the good stuff.

Always go the extra mile to surprise and delight audiences.

It takes lots of simple steps to develop and sustain a career, but fandom forms when artists step up.

“One thing Ed Sheeran used to do, he’d go play a gig at a pub for 150 people, and there’d be 200 or 300 people who couldn’t get in, so after the show he’d go onto the street with his guitar and play another gig on the street. This is when he had 7,000 followers on Twitter.”

No one likes getting force-fed, but everyone’s down for a good convo. Shared affinities build bonds.

“I once posted a clip of a song I had coming out and said ‘new music coming soon,’ it got 50,000 views but about seven comments. The same day, I’m trying to decide my top five Marvel films with my wife at home and I put that list up, it gets 5000 retweets and 700 comments. You gotta know what your fans want to interact with, and what you like as a person. If you love cooking, work that into your Instagram Stories.”

Stay savvy, but cover your basics first. Driving awareness is only half the battle. Equally important: What your prospective fans discover if they click through. Enter first-impression cliches here.

“Some guys and girls now have 50,000 followers on IG because they’re buying the latest streetwear drops and posting fits then returning the clothes the next day, which is fine, but people are worried about the Explore page before they get the music right.”

Whether it’s Instagram, Twitter, or something in between, most social algorithms try to create the best user experience possible: more of what you want, less of what you don’t. When a post draws lots of attention, viewers essentially confirm that post is worthwhile, which brings it to more and more timelines. It’s a crucial little fact to keep in mind when testing and publishing captions, images, polls, etc.

“Instagram doesn’t want all of your followers to see every one of your posts. They want to make 10% of your audience see your post. Otherwise, it’d be like spam, it’s impossible for you to see everything from everyone. If you do something that has loads of people interacting and engaging, their algorithms will push it, and that percentage goes up.”

Turn constraints into fuel for out-of-box ideas that create traction.

Few people make a substantial dent in their field of choice by following the beaten path. The world has less and less time, but more and more appreciation for left-field campaigns that dare to do more.

Derive actionable insights from all that data in your pocket.

There’s so much information freely available to artists and teams that it can become quite easy to overlook important cues that could shape your personal best practices for the better.

“I realized if I posted gig footage along with a clip of a new song, it wouldn’t perform as well as me being an idiot in the studio. So it’s me reacting to the drop. 30,000 views, not bad for me. Then this video of my wife there, it has 150,000. I now know my wife has to be in all my music videos.”

Think about what you enjoy seeing most, not what seems correct, to help guide content.

“I’ve done glossy videos before, but no one cared. No one cares about your single art, either. I can post a clip of my kid reacting to something and that’ll do more than something polished. I once posted a video of my son fast asleep in the back of the car, waking up to this big bassline in my song. That did better than the actual music video.”

Distinguish between who you want onboard and who you have already.

Superficial numbers attract the most attention, but your engagement health matters as much as any follower count ever could. Think as much about your current audience as you do expansion goals.

“Everyone is always like, ‘I need more followers, I need more likes.’ Don’t think like that. It’s about engaging as many of the followers you already have as you can. It’s also about connecting with them, not just growth. If you have 5,000 followers and every one of your videos is getting 2,000 views, you’re than having 30,000 followers and only 500 views on each video.”

Remove any and all discomfort sparked by incentives.

The list of people who enjoy selling themselves is short, but simple approaches give you more control over where and how you grow your base. The social posts we’ve all seen before (“1,000 favorites and I’ll drop the video”) can actually move the needle and provide a compelling CTA to fans.

“There’s lots of incentives worth thinking about offering, whether you’re really established or up-and-coming. From the fan’s perspective, it’s like, ‘What’s in it for me? What’s the bonus in this?’ If you buy a gig ticket, you get this. Or if you stream this and prove it, you get a discount code for merch. If YouTube’s working well for you but Instagram isn’t, how are you going to bring people from YouTube to Instagram and vice versa? These questions matter at every level of artistry.”

Make merch your biggest haters would want to cop.

Artist apparel can move above-average units when it becomes more than walking-billboard basics. If your typical fan wears a handful of brands more often than not, compete with them, not other artists.

“Years ago, we made t-shirts that said ‘skinny jeans can fuck off’ and we sold 10,000 of them. We sold more of those than albums at gigs, and that was a huge deal for me at the time. It was bigger than my music.”

Work with a team that follows and builds upon your vision.

Identity crises strike creatives hardest. Feedback, while a vital ingredient for growth, can go from constructive to destructive quickly. Successful artist marketing takes a team (be it a massive management company, AWAL, or friends in high school) and lots of collaboration, but it also requires steadfast faith in who you are as an artist.

“I signed to Sony/Epic in 2013. They were like, ‘Be more like Calvin Harris!’ It’s not their fault, they’re there to sell records, but people would tell me to change lyrics, or make music that sounds like it could be on Capital FM. It became less and less Elliot, less and less Example. It took me two or three years to get out of that headspace. You have to make music for yourself, no matter how much you trust others.”